Church with Jesse Lee Peterson, January 10, 2021: Everybody “dumps,” meaning sins, yet people judge one another for their wrongdoing. Endure, and don’t tell others your problems. What does it mean to love your neighbor? An unmarried father and mother join us. Do not have sex before marriage. And do not marry anyone who has not forgiven.

Biblical Question: God said that salvation is of the heart. What does that mean? You must be born again. At the end, a distraught man asks how to stop judging himself.

ANNOUNCEMENT: Women’s Forum THIS week, Thursday, January 14, 2021, 7 PM at BOND in Los Angeles. (Normally it’s third Thursday, but Jesse will be out-of-town conducting a wedding in Cancun, Mexico. So we’re holding it a week prior, since the ladies want a meeting!)

We also have our matching grant through the end of the month https://rebuildingtheman.com/donate

What do you think about what’s going on today?

A first-time visitor Jowana (sp) talks about her family and mother. She didn’t have a father in her life, and is drawn to men. Her father was murdered on Wilshire Blvd in 1989. She moved here at 25 after moving back and forth. She has not begun the Silent Prayer, as she feels she’s not ready.

11:08 Jesse never imagined that the world would become the way it is — especially America. They’ve sought to destroy Christianity by destroying the man. But we can get it back. It will be fun, a bumpy ride. Jesse references Jesus Christ. If we’ve ever been divided it’s now. President Trump may be hated more than Hitler. Only Christ has been more hated. Jesse’s said it over and over: You cannot trust an angry person. Look at the people who work with this man, who have turned on him.

Deal with this little stuff in a perfect way. If not, big things will destroy you. Nowadays people are recording and photographing everything.

Endure, and don’t tell it

11:15 Jesse makes the point that everybody has gone to the bathroom (he uses the phrase “taken a dump”). Likewise, everybody has sinned. Yet when one sins, others go after that person like they themselves have not “taken a dump.” You have to be evil to find out about another, and try to hurt them with that information. Anyone with anger, if you tell them your issues, they’ll tell it to others. Stop telling people your business. Don’t tell them your fallen state stuff. People go on Oprah and elsewhere, expose themselves — judged the rest of their lives.

Cheryl comments that enduring means keeping your stuff to yourself. Have an amazing attitude about enduring. Everything is spiritual. There’s nothing anyone else can do about it.

(A man asks when Jesse saw the drug epidemic become a major issue. Growing up, he knew a couple so-called “alcoholics,” and no drug addicts.)

11:22 Jesse recounts going to college to get with a white girl. While partying, he never took pictures, nor wrote a letter. People hold onto letters. He knew his life would change.

A pot defender says that Jesse’s not a pot expert. Others confirm Jesse’s statement that it’s not the same that it was in older days. Jesse comments on the smell. Of course, Jesse is not telling you what to do.

What does it mean to love your neighbor?

11:28 Jesse asks the people: What does it mean to love your neighbor?

A young lady joins us with her boyfriend, who she says has grown stronger. They have children together, one on the way — living together unmarried, in an 11-year relationship. Women have to draw a line, so that men don’t take advantage of them. She’d “like to say yes,” that she’s a Christian. Why not do it God’s way? Her parents were separated, and her father lived with another woman.

11:35 It is absolutely important that you don’t have sex before marriage. Her boyfriend sent her Jesse’s videos every morning. At first she disagreed that women don’t love their children; she still feels like she loves her kids. A mother’s love, does that come from God? She initially felt: “How can you tell me that I don’t love my kids? I carried them for 9 months…”

Jesse asks the young lady: Have you forgiven your mother? She’s in another country. She sees that she should forgive her father, whom she grew up with as a girl in this country. But she does not know of any resentment toward her mother.

Once she forgives her father, she’ll know what love is — it’s not emotional.

She’s African! Yet she’s light-skinned. Her mother’s very white-looking, while her father from Angola is darker than Jesse. She came here at 10.

She has not yet tried the Silent Prayer — not wanting to do it until she forgives her father. As you get older, Satan grows inside of you. So weird things can happen to you as you pray.

Talking with the father

11:48 Talking with Julio, Jesse asks: Why haven’t you married her? Julio says Get a Job YouTube channel does an amazing job with Jesse Lee Peterson SAVAGE Moments. He has five kids — two with two other women, and his first at 15 years-old. His oldest child, his daughter, is now 16.

Jesse recounts his story of making a son out-of-wedlock. By the time his son turned 18, the young man hated everything Jesse loved.

Do the Silent Prayer. Don’t hold it against your daughter.

He’d never encountered 100-percent honesty until he heard Jesse. Seek and you shall find. Once you wake up, you can’t go back to sleep.

A woman reconnects with her father

11:55 Another young woman tells about going to see her father in Chicago over the holiday, showing up unannounced. They are now quite close.

Back to the question: Do you love your neighbor?

11:58 A couple of people answer what they think it means to love your neighbor.

12:00 A young man asks whether his kids will fall away if he comes out of the fallen state. You start a new generation. God is trying to create love through us.

12:02 Jesse asks his Biblical Question: God said salvation is of the heart. What does that mean?

(An engaged couple will marry in two weeks!)

Another girlfriend-boyfriend couple joins us. Jesse tells a story of drama between two women, one black, at a hospital where he worked. He used to be a beta boyfriend; she may be a beta girlfriend, but she has gone and forgiven her parents.

12:10 Do not marry anyone who has not forgiven.

Joel answers the Biblical Question: it means you become pure in heart, quick to repent, and loving what’s right. Doug thinks it’s salvation from the wickedness of the heart.

A young man who looked on Google says that it’s the circumcision of the heart.

Paul was right that our hearts are evil.

Many other people comment. Esteban thinks that it means you will get new desires; he used to like drugs and partying. His cravings were never satisfied, so he’d get deeper into the drugs. Jesse asks him two different times: Are you a Christian? Both times, Esteban responds, “Yeah,” and chuckles — causing others to laugh.

Jesse talks with Julio’s sister-in-law about her relationship with her husband. She did not know what alpha male and beta male meant. Julio’s brother says he learned from others’ experiences.

Jesse talks with a young man who “hated the wrong group.” Now he’s grateful for them. Jesse repeats: This group was chosen by God. Jesus was a member of this family — the Jews! 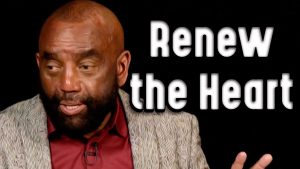 CLIP: God Renews Your Heart; Then You Overcome All Things (13:43)

12:30 Jesse answers the Biblical Question. You must be born again, from the spirit of Satan to the spirit, the nature of God. He references judgment toward other “dumpers,” and not telling others your personal issues. Once the heart is renewed from hate to love, you begin dropping the ego issues — overcoming vices. You can’t overcome it by going to a group (such as Alcoholics Anonymous). Of ourselves we can do nothing, and know nothing. When you judge yourself, you give the Devil what he wants, to drag you deeper into darkness.

Once you’re born again, the ego is gone. Some overcome one thing, but just find another false god. Think about how, in the fallen state, we judge one another — while we’re no better! It’s all spiritual; once you return to Him, He will take it away from you. Prior to that, the flesh is subject to the ego. The Christians who still sin say, The spirit is willing but the flesh is weak. They don’t know what they’re talking about.

Anyone who has anger, Satan is your daddy. People make excuses all the time, blaming others or “white supremacy.” God will renew your heart. Don’t worry about the mess you’re into.

12:39 Mary asks Jesse to repeat his description of “the born-again experience.” When he was young, he wanted to be a son of God.

12:43 Jesse tells why the Bible thumpers don’t change; their hearts are still wicked. And they make up excuses, saying that it’ll happen when they get to heaven. Angry people always have excuses, from Satan.

Ermias asks where Jesus comes in with salvation.

When Jesus was on the cross, he told the Father: “Into your hands I commit my spirit.” Whose hands was he talking about, if Jesus is God? You have to be stupid to believe that Jesus is God.

Jesse reiterates: don’t worry about your “junk” — God will take care of everything else. He will bring you into the kingdom with all your junk, but you must have a pure heart, meaning no anger. Before you enter the kingdom of heaven, go and forgive. He cares about the heart.

How do you stop judging yourself?

A man named Joe asks how you stop judging yourself. Jesse recounts asking his preacher at Crenshaw Christian Center how to overcome. The preacher lost patience with him after Jesse said that he’s already reading the Bible. It’s enough to admit, I want to get over this. And God will take care of it.

12:55 This is Joe’s first-time here; he’s had a struggle finding meaning and purpose in life. Jesse says that his only problem is that his heart is not pure. Satan is his daddy. A year ago Joe tried to kill himself. Jesse tells him how to go and forgive his mother.

Jesse again repeats his commentary on dumpers judging others.

We have our matching grant through the end of the month!

Ladies, we’ll do Women’s Forum THIS Thursday (the second Thursday) instead of third Thursday, on which Jesse will be in Cancun, Mexico.

The Antidote is now available on paperback! Thanks, all!