Watch yourself, and see your wrong motives for “seeking God.” There is no such thing as purpose. Just be. A Virginia abortion bill reportedly would have allowed infanticide. When men are weak, women make bad decisions.

At the beginning of Church, Jesse asked a little about the Super Bowl which takes place today.

“Seeking God” with the wrong motives

A 27-year-old man asked about God’s promises regarding tithing. He says he’s not seeing the riches that God promised, that God said to test Him in it. This man Will says he’s forgiven his mother and father, and done everything Jesse said, but isn’t seeing the great results he expected. Jesse urged him to “Just be.” Have no expectation, and let the lying thoughts pass. He’s seeking after God with the wrong motive, in order to get stuff, to get rewarded. It’s all selfish — do not desperately want anything. The ego deceives people who have been told wrong about religion. Just watch and know yourself, see that your motive is wrong, and God will change it.

Do you have a purpose?

Jesse discussed with different people what they believe their purpose is, or if they have one. Earlier in life Brenda used to look for her purpose. Ed used to set goals, but now he says his purpose is to build a business — but not to where he’ll get involved with the wrong people. Joel realized that what he perceived as his purpose was misguided and undermined his business as a dance teacher. (Joel believes that God doesn’t want you to be poor — some preachers say God wants you rich, while others say you should be poor, and that Jesus was poor!)

One couple said their purpose is to build a conservative network. (There’s some confusion as to whether they are officially married yet still engaged, and the setting of their legal wedding by a justice of the peace.)

There is no such thing as purpose — that’s a made-up word by the children of the lie. Just be, and you will see how to do the right thing. Our job is to bring love into the world, while the job of the children of Satan is do evil. 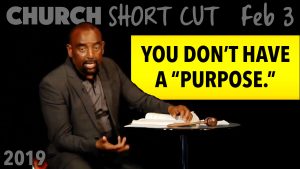 (Watch 4-minute Short Cut: No Such Thing as “Purpose.”)

There was a state bill in Virginia that would have allowed a woman to get an abortion at any point, up to birth. Years ago, Barack Obama voted for infanticide, allowing a child to die on the medical table after a botched abortion. Evil wants to take the man completely out of the picture, and it works through people, whether they realize it or not, to make that happen. The governor of Virginia was for this bill, but a picture of him apparently wearing “blackface” or a KKK hood. Now people want him to resign for that stupid thing, but they didn’t care about his pro-abortion stance! Who cares about “blackface” or a hood? Black people don’t care about that, except to control white people.

When men are weak, women make bad decisions. And now women in office flaunt their immorality, living with their boyfriend (“partner”), being Muslims and lesbians. A couple of ladies at Church talk about evil things reportedly done with fetus bodies, which powerful and famous people support! People on the side of good must speak up. 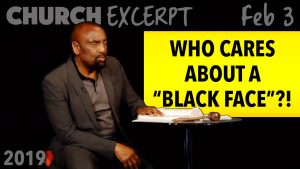 Watch 6-minute excerpt: Abortion Out-of-Control: When Men Are Weak… (Who Cares About a “Black Face”?)

Later in the service Jesse points out that Donald Trump predicted this madness in a debate with Hillary Clinton! When you wake up, evil cannot hide — you can see where people are coming from.

A few people asked about ideas versus revelation. The way to know is to watch yourself.

A 40-year-old man Turner joined us in a wheelchair. He was shot in 2001 amid a fight around video games! He says he has more anger for his father than for the man who shot him! His mother died three years ago. He discovered Jesse’s videos just a few days ago, and realized Jesse was right that he needs to forgive his father. Just as he couldn’t see what he was doing when he got in that fight, so his father couldn’t see the wrong he did with him.

Jesse has Will read some passages from Matthew and Luke: Be careful not to parade your uprightness before others. Love your enemies, and lend without hope of return.

The ego feeds you, makes you think you’re holy, and confirms the lie. When you observe yourself, you’ll find you have a hidden agenda about everything! It’s all fake!

Later, a young man Leo talked about not wanting to speak from ego. He asked about crying about his mother not being able to see. He did the Silent Prayer and saw how crazy his thoughts were. And he started recording a video with a companion about conservatism.

It’s ego to take things personally — it’s selfish. When you wake up, you know it’s not personal.