What does it mean to be born of the Father? Which is more important: Being right and doing right, or having a woman?

Church with Jesse Lee Peterson, Sunday, September 5, 2021: What does it mean to be born of the Father? // Are not all women evil? // A couple with a 10-year-old son still lives together unmarried! // What should parents do about brainwashing in schools? // Jesse speaks at-length on being born again. // Biblical Question: Which is more important: Being right and doing right, or having a woman? // New BQ: Have you prayed the Sinner’s Prayer? If so, why? // Larry Elder was asked about an ex-girlfriend accusing him of waving a gun at her. Why is that important? //

Q: What does it mean to be born of the Father?

11:04 Jesse comments on how most people are weak today. We’re bringing back Christianity and love this year. Have love. They’re taking away your rights, because you won’t say anything.

Not all women are evil?

One young lady Janava (sp), originally from West Virginia does not have a defined religion. Her mother was raised Catholic.

When pressed for disagreement, she says sometimes his opinions on women are slightly off-putting. She doesn’t agree that all women are evil. She believes there’s good and evil (“yin and yang”) in everybody. Has she ever met anyone who wasn’t evil? She believes men can be at the root of things that are evil in this world — violent perpetrators, for example. Did she know that the anger of a man came from a woman?

She believes women lift spirits by being nurturers and caregivers, bringing goodness into this world. (She feels put on the spot.) She was raised by women, so it’s hard to hear women are the bearers of all things evil.

11:13 Jesse gets back to the question: You’ve been born again. How do you know you’ve been born again of the father? A black young man says he accepted Jesus as a 10-year-old kid, prompted by a pastor. His mother allowed this. This is his first time here, brought by his uncle (Dathan!).

11:17 Another man went to his mother first, which was easy. Going to his father was tough. He said vices started dropping. He’s been doing the Silent Prayer, morning and night, for two months straight now. (He’s sitting with the young lady who disagrees with Jesse about women.) He has problems controlling his thoughts. But Jesse points out you don’t control them.

They’ve been living together unmarried

Asked if he’s the head of his wife, he says he believes he is, but he’s not married yet. His young son also joins us in the meeting. They’ve been together for 12 years — living together for 10!

11:22 The lady stayed living with him unmarried because of their son. She says it’s worked all these years, but it could be better.

11:23 Their 10-year-old boy Kieran doesn’t really care if they get married. He says it won’t change anything — it’s just marriage.

11:26 Jesse asks the man the Biblical Question: Which is more important: Being right and doing right, or having a woman?

How to keep from falling away?

11:27 A 22-year-old man feels like he had a born-again experience after he started seeking God in high school. He was a believer as a child, he says. What is a believer? He studies the Bible a lot, meditating on God’s word, he says. This is his second time joining us.

He asks how to ensure he does not fall away from God again. Once you’ve been born again, you can’t fall back. Keep it going by being still — and let His will be done. Inside of you, you have God, Christ, and the Holy Spirit. Stay present with God by staying out of your imagination.

11:30 The man says he felt good. (Jesse makes fun of his friend the Russian’s head rag.)

11:31 A man tells about becoming a Christian at 27, and how the last 4-5 years he learned about a moment-by-moment relationship with God.

This man has a question: He says his 12-year-old son has been at a government school for a year. The young man is in a class called “Decolonized” drama class or something.

11:35 Another man’s kids are in a liberal charter school. His sons’ mother is a liberal. So he cannot take them out of the school. His oldest son is about to be 13.

11:37 Jesse says he’d take the kids out, because millennials have no morals. 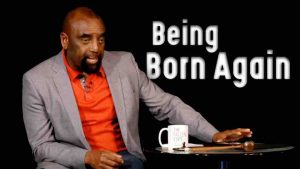 11:38 Jesse tells why he asked about being born again. You cannot trust an angry person. Anger is pure evil. They used to call anger hatred, but now people pretend anger is okay.

It’s not true that God loves you as you are. Anyone with anger has the nature of Satan.

Jesse didn’t know he couldn’t see until something woke him up and allowed him to see. He resented his mother who turned him away from his father.

When you’re born again, your heart changes from hate to love, and then God starts cleaning up the vices.

You must and can be born again, but you can’t make it happen. Inside of all of us, God is already there. But you can’t enter into that Kingdom of Heaven within with that anger. God will change your life.

Amid debates with intellectuals, Jesse was stunned he was able to do it. He did not respond to personal attacks, attempts to embarrass him, because he had love. Be still and know Him. Seek Him first, and He will guide you. Jesse has love — not his own love, but the love of the Father.

You’re not in control. You don’t have a free will. Only he causes it.

Should I feel guilty for sins?

11:54 A man asks whether he should feel guilty for his “sins.” First, the vices you do are not sins, Jesse says. You use those things to find some peace or happiness. Anyone who has anger has a wicked heart and is playing god. Don’t judge yourself. Don’t judge it, and it’s losing control over you. God inside will fight the lie of Satan in your head.

The Christians will blindly judge you for smoking a joint. God will change your heart from stone to love.

No words to express what it is to be born again

11:57 Another man suggests pride is the original sin. You thought you knew it all, but when you get rid of your pride, you realize you don’t know anything. It’s humbling, he says.

Jesse elaborates: Satan is so deceiving, he’ll make you think you have it, or you’ll never get it, or some other lie. Bring all thoughts into captivity. All thoughts are all lies, all the time. Let go of all you think you know. Become dumb.

The preachers don’t know what they’re talking about! You have the Teacher within you; He will teach you all things.

11:59 Another man talks about Paul saying be not slaves to sin, but slaves to righteousness. He and college friends intellectualized it to mean something else.

Preachers will interpret the scriptures completely wrong, not knowing what they’re talking about.

Earn your way as a man

12:01 Jesse asks a lady if she’s been born of the Father. She says yes: it’s peace. Do you have any anger, Jesse asks her. She says if it does arise, she just observes it, and it disperses.

12:03 A young man Chris joins us for the first time with his mother. He says anger arises at times in him. Did you know any man who has anger is a woman? How did you become angry? He’s not sure. He thinks it’s normal to have anger, because everybody gets angry. Jesse brings up the example of a girlfriend controlling him with anger. He doesn’t like being controlled. Jesse encourages him to forgive. He goes to junior college and plays a sport, living at home to save money. Do you prefer your mama taking care of you?

He admits it does bother him to live at home with his mother. But baseball and school are more important to him than getting a job (and self-respect). His father pays for his food and cell phone. Forgive your mother for spoiling you, and your father for not making you get a job, Jesse urges him. Get a job!

12:11 His mother then says she lives in Idaho with her daughter, no longer married to his father. She asks about his living with his father and grandparents. Jesse responds. Get a job and help pay bills there.

BQ: Being right or having a woman?

12:14 Jesse then gets to the Biblical Question: Which would you prefer: Being right and doing right, or having a woman?

Mother’s spirit passed to a child

12:15 A man asks if a mother can transfer a spirit to the child without him realizing it. Jesse also responds, explaining how a child identifies with a mother. All have sinned because all have been born through the woman. God sent his son so that you could be born of the Father.

The man would look to his outspoken sister for approval. It’s so bad now that he avoids her to a degree. He doesn’t realize it, but he’s weak that way with all people, Jesse says. He’s from Virginia. Stay with the prayer.

12:21 Dathan says he had a similar issue as the man, with an older sister. He didn’t know he needed to forgive siblings. He was seeking women similar to his sister, and it was a nightmare. But now he can deal with her as normal!

Jesse agrees: Once you forgive your sister, it will be easier to deal with her. Jesse has a couple of mean sisters too, but can deal with them.

Why this Biblical Question: Women are the man’s god

Jesse explains why he picked this Biblical Question. Some guys will ask: When I wake up, will I still have a woman? So Jesse thought: What’s more important — being a man or having a woman? Once you return to the Father, nothing will be missing. And if it’s for you to have a family, God will add that to you. And if not, you’ll be fine.

The desire to have a family is not real either — Satan told Jesse this too. But really you have a yearning for the Father.

12:27 Another man once thought he needed a woman to have a life. He came from a broken home, with a single mother.

12:29 Jesse describes the perfect order of God: God in Christ, Christ in man, man over woman, and woman over children. The worst thing in a woman’s life is a weak man.

12:30 A man points out men want sex or fornication. We are to be fruitful and multiply. But the yearning that you have is to return to the Father.

12:32 A woman asks Jesse about how she can go forward given her husband who wouldn’t say he’s a Christian. Jesse tells her: Don’t resent him.

12:34 Jesse urges: Do the Silent Prayer. It’s no wonder the Christians are losing: They’re into theology but not God. Get to know yourself. Speak up but don’t resent. All thoughts are all lies, all the time.

12:35 Jesse and Nick ask the new Biblical Question: Have you prayed “the Sinner’s Prayer”? If so, why?

12:38 Jesse mentions about an interview with Larry Elder: A reporter asked him about allegedly drawing a gun on a girlfriend. What does that matter? What does it have to do with running the country?

12:40 Men are more beta than women in some ways! Jesse rants briefly about men riding in the woman’s seat (passenger side).

Thank you for the support!