Posted at 13:45h in Church by James Hake 0 Comments
1 Like
Share
BOND: Rebuilding the Man · 10/31/21 "Racism" and Other Communist Brainwashing (Church)

Church with Jesse Lee Peterson, Sunday, October 31, 2021: Before Jesse said that racism does not exist (and never has), did you at one time believe it did? Jesse watched the late Yuri Bezmenov describe communist brainwashing and intimidation in Russia and America. Speak up! Look at the things you believe that are not true. Society caters to women for money and power. All angry people are brainwashed. Some mothers ask for advice on dealing with their children and work. Get involved in the government. We can defeat evil! 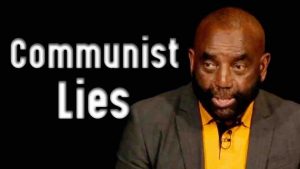 Ex-Russian KGB agent Yuri Bezmenov warned Americans to tell the truth, and not fall for the lies and division.

10:55 AM US PDT We start streaming a few minutes before 11 AM PT, and Chris gives initial announcements.

Did you ever believe racism existed?

11:01 Jesse asks people if they believed racism existed before Jesse said it doesn’t. Did you believe racism existed at one time? Jesse says he was never taught that. One man Ed says that culture rises as civilization falls; it belongs in yogurt. Jesse didn’t know culture existed. Ermias didn’t believe the people who said racism is “subtle.” An Ecuadorian lady Linda says her mother was classist. School and media push the history of “racism.” A black lady Mary says the black people treated her the worst. Doug would joke with his friends about race all the time.

11:16 Jesse talks about seeing a video of an ex-KGB agent talking. He was transferred to India for a while. He dressed up like a white hippie there, in order to sneak out. When they turned Russia into a communist society, they brainwashed the people, make up a fake problem and have them fight amongst each other. They’d repeat it in the media to divide people, and turn the country socialist. They invited actors and dignitaries to the country and put on a front of decency. But underneath, they had death camps. He’d get people drunk and high.

They’d put out lies about history, and send the deceived experts back to America to repeat those lies. They’d call the experts useful idiots! (I believe Jesse’s talking about Yuri Bezmenov.)

They’d create false emergencies to see how the people reacted in fear. They were able to control the people with fear. They divided the fearful people from the non-fearful people. This is like what’s going on here — the vaccinated against the non-vaccinated.

The dumb professors worked for the government for the rest of their lives, and were used to promote vaccines, spy on the regular people. They were greedy. The media did the same thing, because of ego. They attacked Christianity as something bad over there. The media promoted it as bad too. So the people turned on the Christians. The same thing is happening here!

They used the homosexuals, lesbiand, and perverted people to bring about what they want. Then they killed them. They used them to demoralize the people. It took 20 years in the universities to brainwash the generation. Today, young people don’t even know they’re immoral!

11:28 Jesse never heard the word “racism” at all, growing up. The reality is there’s no such thing as racism. But since it’s been validated by parents, the people believe it, and are divided. We’ve been lied to! In the media, everything is a lie — not just the liberal media, but also the conservative media! So we can walk around not knowing we’re brainwashed!

So Jesse wondered how he became unbrainwashed. When God woke him up, he realized it’s not about race, but character. Every angry person is brainwashed and cannot see.

11:32 Jesse talks about a really fat black woman who said something like “we gotta take these M— F—ers out,” or “take the white people out.” (This was a Rutgers professor, Dr. Brittney Cooper, talking on black publication The Root.)

11:34 The Russians would try to destroy your reputation if you were not afraid, and if that didn’t work, they’d kill you. Franky says this was the late Yuri Bezmenov. The deceived Americans wouldn’t even believe it if the Russians said

11:37 If a brainwashed person saw this same video, would they believe the warning? He warns people to start speaking up, and refuse to back down.

Jesse warns not to listen to a woman who says she was abused if she doesn’t say what she did in the relationship. In America, it was innocent until proven guilty. But that’s gone now!

11:44 Ed talks about seeing a hypnotism demonstration at a company. The people easily hypnotized were the angriest people, including a nicey-nice woman. Everyone said they were fully conscious!

11:46 Jesse talks about the race thing. They need regular people fighting amongst each other. They didn’t make you angry; they just brought it out. They’re “useful idiots,” as the Yuri Bezmenov guy said.

In India, there are gurus who teach you how to meditate. Entertainers in America would go learn to meditate, and come back pretending to do something good. Then the gufus make money and fame.

11:53 Franky also talks about the wars pushed by Russia by subversives.

JLP: Bible thumpers another example of the brainwashed

11:55 Similarly, the Bible thumpers are brainwashed, even saying that Jesus is God! That’s why you shouldn’t let people teach you either. The Holy Spirit will verify if it’s right or not. God looked out for us by giving us the Teacher (within). We shouldn’t have a plan in life. People get stressed out, and the experts give you a pill.

They will scare you and then control you.

JLP: Think about the things you believe

11:58 Before going to more people for feedback, Jesse warns: Think about the things you believe and fall for!

11:59 One man talks about how education and science are getting corrupted by people infiltrating and twisting the truth. You can see nonsensical perversions. Bruce Jenner is a boy! Ainsley something on Fox News was calling him a “she”! That’s brainwashing!

12:04 Another man says Edward Bernays wrote a book called Propaganda, based on advertising. He pushed the “experts say” tactic, and the saying that “breakfast is the most important meal of the day.”

12:07 Jesse points out you can live by common sense. God wants you to be in the world but not of it. He will renew your mind.

12:08 Jesse describes interviewing a couple for The Fallen State (not yet released) — this couple does Christian counseling. Jesse asked if the wife obeys the husband, and the husband bristled at the word “obey.”

In the good old days, if a salesman came to the house, the husband would not let the salesman talk to the woman. The salesman knew the woman is crazy and emotional. This man Bernays knew that the man would consult with the wife before a big purchase. So salesmen would urge guys to consult with their wives and bring them in — giving more “buying power” to women, for more sales.

12:12 A bigtime preacher said that women control the purse so he caters to women.

Live from within. You’ll have patience, and be equipped. God loves us.

12:13 A woman says she needs help overcoming her anger. She really hates single mothers now, she says. Asked about the Silent Prayer, she says she tells herself the thoughts are lies all the time. She says she stopped smoking weed and drinking (a woman!). It’s not you feeling that way. It’s a spirit. God will fight that battle for you. Allow yourself to go through what you have to go through. Don’t be upset about it. Let it happen. She says she’s been angry for 25 years.

Society uses people in their anger to push pot on people!

God takes care of you / consumerism

12:20 God said you must be born again. All who are born of the mother are dying (and angry). God will take care of you.

Franky talks about brainwashing people to be consumers.

Christians and anger / Mother asks how to face anger

12:23 Jesse interrupts a lady to say anger is evil. The Christians have allowed themselves to be brainwashed to believe that you can be angry.

A lady asks what it means to face anger. Does that mean enduring it? She tells her husband when she’s angry at her daughter, and he gets angry too. So Jesse advises her.

You can defeat evil / get involved in government

12:28 A man brings up how people exploited the First Amendment to push degeneracy. We too should speak up, and love what’s right. We can defeat evil, Jesse says.

Christians have been convinced not to get involved in government. Get past the anger and you’ll see how to fight.

12:33 Linda is six months pregnant! She realized she was annoying her husband with all kinds of questions.

12:36 A first-timer brings up a new Colin Kaepernick commercial, comparing the NFL to the slavery auction block.

This man forgave his mother, but says he didn’t have much to forgive his mother about, as she was supportive of his father.

12:38 Another first-timer Chris just discovered Church after knowing about Jesse for a long time.

A young lady’s boyfriend brought her. Asked about her boyfriend, she says he’s alpha. His name is Matt. They watch Church where they live up in San Jose. He says forgiving his mother and father made a difference in his life.

12:41 One young lady suggests we put a sign in the window: Forgive your parents.

One other first-timer talks about wanting to befriend some of the ladies.

12:44 Jesse talks with Adrian, asking if she’s still overreacting. She talks about being a single mother and working as a manager. Be grateful. Do the Silent Prayer. Stay out of your head. And you’ll be fine.

12:46 Jesse says the spirit of anger has to be taken away from you. We need to overcome because this country is not done yet! (A transgender guy called himself the first lady to achieve some position in the government.) Endure the inner pain.

We offer counseling. Thank you for the support! We’re looking for a front office person; you need to know some accounting.