Church with Jesse Lee Peterson, Sunday, January 24, 2021: Jesse tells the people: I’m not your guru, and don’t blame anyone for your problems. Let God’s will be done, and count it all joy, enduring without complaining. A lady with a sick adult son in Norway wants a sign from God for why he’s suffering. Jesse urges her to relax. Salvation is of the heart. Let go, and let God. Two emotions you don’t want: Love and hate. Biblical Question: How do you perceive your life?

(We started video streaming about 11:00 AM US PST)

An old friend of Jesse’s died recently. He heard that the morgue is full, and that there are delays in cremations and funerals. But he’s not sure he believes it.

I’m not your guru. Don’t blame anyone. 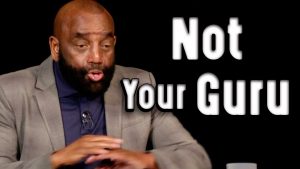 One guy asks how Jesse explains whether Jesus is God or not. In response, Jesse urges all people not to have any guru. This young man believes that God is in Jesus, but was told by a friend that scriptures back up the notion that Jesus is God. However, when he read the Bible passages, he remained unconvinced. Jesse wouldn’t argue with anyone about it; it’s wrong to impose your will on someone.

11:13 In talking with a young lady, Jesse repeats: I don’t want to convince you. You should see for yourself. One man responds to a prior question about people who live on a remote island who never heard of Christ.

Jesse makes the point that teaching the Bible often makes it harder to find Christ.

11:18 Continuing this brief monologue, Jesse talks about how people get so caught up with other people, and lose themselves. Any man who blames someone else for your problems remains weak and pathetic. In older days, adults did not blame others.

In talking with a 27-year-old man, Jesse comments that millennials blame everybody — because they’re weak within. The young man went through a lot as a child, but fell away from God as an adult. Jesse repeats: I am not your guru! Women who get involved with men often want them so badly that they’ll do anything to get control of them. Even with our corrupt government, we are to blame.

11:24 Jesse elicits laughter when he recounts his grandmother telling him he’s out of the house when he turns 18. Young Jesse asked at the time, “Where am I going?” His grandmother responded, “I don’t know and I don’t care.”

Let God’s will be done. Count it all joy.

A young woman with a thick accent asks about God answering prayers. Her 30-year-old son has MS, and she does not have money to help him. A friend of hers with money also has a sick child, but she has money to help the child. She asks about Jesus doing miracles in the Bible. Jesse responds by telling her: Pray that God let his will be done for her son. We know not what to pray for at all.

Count it all joy

She wants a sign, because she feels pain over the situation. She’s very upset. In response, Jesse urges her to get over her ego, and stop whining.

Jesse says: When you feel the pain, count it all joy. That’s what it means to endure. Pay attention to the thoughts; they’ll set you up.

11:32 She asks why her friend was able to pay $100,000 to fix her son. You have to look at you only, and not worry about how good or bad others have it. Jesse tells her: You have something greater than money: The power of God in you. But you must overcome the spirit of Satan in you.

11:39 After she carried on a bit, Jesse talks about things being too important to people. Let it go. It’s too important.

Jesse tells a story of overreacting as a kid to being forced to receive a vaccine shot as a kid at school. He received multiple whoopings and still had to get the shot!

11:44 Jesse urges the woman to do the Silent Prayer. She says that her son is more worried about her than for himself. She’s playing god. Back down! She’d prefer her husband get sick, but not her son.

11:50 Jesse asks her if she’s willing to endure her pain without complaining, until he takes it away. Stop complaining. Feel the pain, and go about your day.

11:55 This lady found an old Bible in the ocean or something, but she says she would not sell it. She would give someone the Bible, but not sell it. Jesse notes that white people buy old paintings that don’t even look good. He urges her to sell the Bible.

Again: Salvation is of the heart 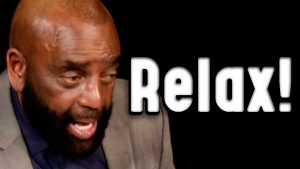 12:01 Don’t judge yourself, don’t trip out. He’s with you. The sin is of the heart. Love your neighbor; we’re supposed to pray for one another.

Jesse hears Christians criticizing Donald Trump, judging him and hating him. Jesse says: I love Biden; I love Obama. We can’t hate, just because we disagree. Anyone with any iota of anger: Satan is your daddy. Angry people don’t believe you can live without anger.

12:05 After another young lady comments on the first woman’s situation, Jesse says: If you want to know if you believe in God or not, endure the pain. Overcome your attachment to the world, and what the world thinks of you. All the stuff you’re into is ego stuff we fall into in our fallen state. … Let the ego go.

12:07 This young lady tells the first one that she was upset when she lost her baby. Jesse counseled with a woman who’d had an abortion, and did not tell people, but urged others not to get an abortion. After they somehow found out, they turned on her, calling her a hypocrite. She could barely handle it. People want to know your business so that they can judge you. But what people think is too important to you. Don’t care. Be yourself. But don’t share your problems.

12:11 Mark comments on how Abraham was told by God to kill his son. When you want a specific result, that’s not saying: God, let your will be done. Some desire a marriage or family so badly that they’ll do anything. You don’t want your emotions attached to anything of the world. The world does not love you. Build your house on a solid foundation, so that you’re ready.

12:15 Mark tells the mother that his mother overreacted to his behavior in the past. It made him worse.

12:16 After a man starts to compare the woman’s situation to his own loss of his son, Jesse stops him and urges people: Don’t compare your situation to anyone else’s.

Jesse briefly interrupts to make the point: Two emotions you don’t want in your life: Love and hate. Those are some dangerous emotions. Joel explains: They’re both the same thing. They’ll love you today, and want to kill you tomorrow. You don’t want emotional loves.

A man tells about conflict and forgiveness in his family

12:19 A man talks about letting go and later about forgiving his mother. His daughter called him a white supremacist when she learned he went to Washington, D.C. to protest in favor of President Trump. She accused him, a 54-year-old man, of staying calm to manipulate her. He drove out to the desert, and heard from his mother by phone in the nursing home. He was able to tell her that he now understands that she could not help her anger.

12:25 Another young man, age 18, speaks up talking about how his mother made his father out to be the bad guy. His father’s side of the story made him mad at his mother, so now he’s mad at both of them. There are some who get a fake joy to hurt others; you cannot hate them. He asks when to take advice to people. He used to be into drugs, but went into rehab to beat the addiction — yet now he still has inner conflict.

12:34 After Franky makes a point about going through the pain and not being sure how to do things, Jesse also relates with his story.

Did you know that you’ll have to endure the pain once you wake up? Jesse didn’t know, but knew that nobody could help him, so he didn’t complain.

Jesse asks a few people his Biblical Question: How do you perceive your life?

12:41 Jesse says he perceives his life as not his own, and he cannot do anything about it. He then asks Chris to come up and read the “If—” poem (by Rudyard Kipling). We should do the Silent Prayer so that God can be with us and guide us. Endure. Let go, and let God.

When the pain comes, when people turn against them, that’s when many give up.