Church with Jesse Lee Peterson, Sunday, January 31, 2021: Men, stop telling women your problems! Do you believe Jesus is God? How do you repent for your sins? Stop playing God; stop judging yourself and others. 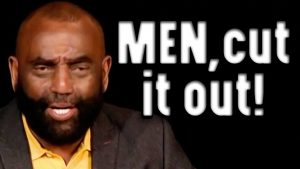 11:00 AM US PST: Jesse opens by talking about a group chat he took part in which educated black women, and some men, talked about men being vulnerable. Where did the idea come from that men should tell their problems to women? One guy felt it started with television. Oprah used to do this on her TV show. Once you tell your weaknesses, the women remember and judge you forever. Another man did not have his father growing up, so he told his mother his issues — and later, his girlfriends!

Jesse keeps asking guys if they have a “shame clock,” or something inside that tells you not to tell anyone your problems.

Francisco recounts the biblical story of Sampson, who told a woman Delilah his secret of his strength.

Men, go to God with it. There’s nothing women can do about your problems. Women need you to be strong — like you need God.

One young lady’s ex-boyfriend told her his problems back when she was 19. She was very disappointed at the time, and looked down on him afterward. She softly shouted, “Beta!”

It did not used to be this way, to Jesse’s knowledge. Cut that out! All have sinned and come short. Go to God with it, men. It’s spiritual. Tell your children the same. Republicans and Democrats hate each other; they’re at war. We’re supposed to be different from the world.

One guy was vulnerable on social media, and got “positive” feedback from women.

Often, men might do it for sex. One woman said the men turned her into their “mommy.”

11:26 One man was called cold-hearted and uncaring. He now dislikes the weakness expressed in R&B and soul music. Others share as well, including Mark, who’s married, and a 12-year-old girl.

Do you believe Jesus is God? 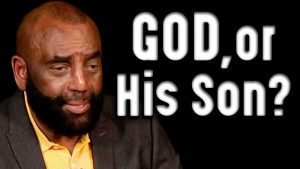 11:32 Jesse asks: How many believe that Jesus is God? One man once believed it, raised Catholic. No one else believes it.

Samuel opened up the Bible this week, and found the book of James, in which it says to “count it all joy.” He also references one of the books of Peter.

Rachel asks about Chrisitans believing that it’s the “end times,” and that “the rapture” is coming.

Esteban asks why people get so caught up with an idea (such as “Jesus is God”) that they’ll cut you off over a disagreement. They have no love.

How do you repent for your sins?

Jesse then gets to his Biblical Question: Did you repent for your sins? How did you do it?

11:55 Grace talks about trying to repent, asking God for patience, and listening to others’ advice. He told her that when you ask for patience, God may give you things that severely test your patience!

Others talk as well, answering the question: How do you repent for your sins?

12:10 Jesse urges people: Put your cell phones down for an hour or two every day. You need that quiet time with no music, movies, cell phones, distractions. The world keeps you busy.

Have you been enduring this year?

12:14 Jesse recounts what happened with him, telling the people that God does the work, cleaning you up. Of ourself we can do nothing.

12:24 You repent for playing god, for judging your parents and fellowman. Endure when someone tries to hurt you. Be happy when attacked or smeared, because God is taking your ego need for appearances away from you.

12:28 Jesse answers a question from Grace about others pointing out your faults. Repent from your ego. Stop judging your fellowman no matter what. Wait until you feel the ego death. In life, don’t focus on overcoming your alcoholism or any of your “stuff.” Focus on the heart. God renews the heart and mind. It’s spiritual.

12:35 A man joined us with his daughter from Las Vegas. He loved the conversation with the lady who had a son with MS last week.

Everybody is fake! Both friends and family.

12:45 Margaret mentions Nancy Pelosi (and another lady mentions Democrats). You cannot hate her. If you are angry at her, you hate her. The sign of hatred is anger. Emotional stuff is mama’s love, but actually it’s Satan’s love.

Once you’re truly born of God, you’ll see what to do. When people become angry, they become afraid. In anger, there’s fear.

12:48 A man asks about the Bible verse that says to “hate what is evil.” Discern it.

12:50 Thanks for tuning in. We have the best counseling service on this side of heaven!

Today was the last day for the matching grant.

Brand new Biblical Question: What is the purpose of love?