NOTE: We had some bad skipping during the live video stream today. We have re-uploaded a clean recording.

Church with Jesse Lee Peterson, Sunday, February 21, 2021: We open up talking about unhealthy people aging early, and societal rules about men and women. A married couple talk about anger and family. Biblical Question: How do we love God? In talking, Jesse makes the point: We cannot have any excuses. In overcoming the ego and your issues, stop fighting. We read a passage from Luke (6: 30) in which Jesus talks about loving your enemy.

Jesse wonders whether there’s a way to get old without your body breaking down. He saw a person whom he had not seen in awhile who got fat and bald. One man comments on people getting lazy today, not wanting to walk, as well as the unhealthy food made today. He says that cancer is a big money industry. After Chris starts to talk, the man pipes up again saying that divorce and stress cause baldness — in both men and women. The lockdowns have made things even worse.

Victoria says that the ladies know that it’s not okay, including even Lizzo. We need a healthy society back.

11:18 Jesse describes a video of an Asian man smacking a woman back, after she hit him first; but the crowd attacked him for defending himself. Is there a rule that a man is not supposed to hit a woman in self-defense? In the old days this was not pushed like it is today.

Married couple on anger and family

A couple joins us for the first time; the wife has watched for a couple of years. The man has a little anger (she tells him not to make decisions amid heightened emotions). But he did go to forgive his mother. He has not seen his father in some time; he thinks his father abandoned his mother and children. Don’t believe the woman! There are two sides to every story.

He says that Jesse opened his eyes more, and he appreciated his show. It’s good that the wife is a good example. He disagrees with Jesse that sex is just for making babies, and not a big part of marriage. They’ve been married almost 30 years.

How do we love God?

11:31 Jesse asks his Biblical Question: How do we love God? Do you love God?

Societal problems: We cannot have any excuses

11:37 After several minutes, a man goes back to the topic of people being fat. He says that estrogen is in a lot of food, and testosterone levels today are much lower than prior generations. He says the bigger issues, rather than morals, is because we outsource everything, and don’t produce everything. He says that people can’t afford land as easily because of corrupt banks. Jesse insists that we allow things to be this way, and that’s why they’re the way they are. You cannot have one excuse. Life brings on challenges; enjoy the good and bad.

Back to the Biblical Question

11:43 More people respond to the Biblical Question. It’s one couple’s anniversary, and the wife’s birthday! 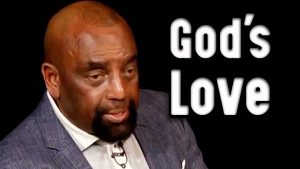 11:46 In response to a question about the ego, Jesse says that people should stop judging themselves and trying to fight their issues. We cannot keep the commandments until our heart has been renewed.

11:58 Jesse finishes responding to questions from a woman who still gets impatient with her 10-year-old daughter who spilled lemonade. The girl acts just like her father.

12:01 Jesse responds to a “Super Chat” question from a mother with young children around her all the time. She wants advice on doing the Silent Prayer. Do it early in the morning before the children wake up, before the sun comes up — no later than 6 AM.

12:07 Joel Friday and Jesse’s other experts talk about whether (and if so, how) they love God. Some say they do not love God, prompting “oohs” from the other people in church.

12:20 A man tells a story about his mask falling down in Costco, and God told him to leave it off.

12:22 Esteban does not know how to love God, and is not sure if we can. But he thinks the best way is to love your neighbors, not showing anger against them.

Jesse answers how to love God

12:25 Jesse then answers the Biblical Question, talking about God’s love. The way you love God is to stay present with him.

12:32 Jesse says that God does not remind you about yesterday. He says take no thought about tomorrow. The past and future don’t exist.

Jesse talks about hanging out with his great grandson who has so much energy and wants to be independent.

(A young woman gives some input before Jesse cuts her off because of time.)

12:39 Jesse invites a man on-stage to read an example of what God’s love is like. In the Bible, Jesus tells about loving your enemy.

When you forgive, you no longer desire to try to get back at a person. You cannot fake it. For those who have forgiven, stay with the silent prayer, have a wait and see attitude. Have that quiet time.

12:44 A man asks how to deal with people. It stuck with him when Jesse said that you cannot trust an angry person. Give everybody the benefit of the doubt, and you will see. Don’t walk around trusting or distrusting people.

12:45 When the passage says “don’t ask for” your stuff back if someone takes it, don’t listen to what Satan tells you about it. Some people think about Antifa and Black Lives Matter.