Speak up in this upside-down world. Husbands protect your children from their mothers. If you don’t have the spirit of anger, it cannot come up; don’t avoid dealing with situations.

Church with Jesse Lee Peterson, Sunday, May 16, 2021: After welcoming the first-timers, Jesse points out it’s an upside-down world: Wrong is called right. Speak up. One young lady lost her job, but gained another opportunity! Life unfolds even if you’re not “educated,” and you let go of worldly attachments.

Society is a mess; husbands are afraid of their wives, and fathers won’t protect children from mothers. Some people fear dealing with situations because they worry about anger coming up within them. If you don’t have the spirit of anger, you don’t worry about possibly getting angry; don’t run from or try to create confrontational situations.

We talk about expectations, people being fat, men being weak, and brainwashed young people swallowing lies. Fight back in the right way. When you forgive, God begins to change you naturally as you live. We also touch briefly on “taking the Lord’s name in vain,” which some say is when one says, “Oh my God.”

New Biblical Question: Can you earn love and respect?

Jesse jokes with the people about getting people to sit in the front row, and about Mexicans and blacks showing up “on time” for parties. He then tells a story of his knee swelling after he ran hard two weeks ago. In track and field as a high schooler, he had fluid in his knee, so he quit rather than get a needle put in it. 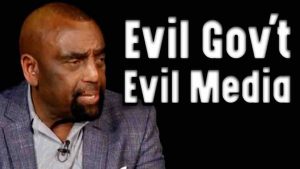 A young woman loses one job, gains another

Marlene talks about teaching a sex-ed class (by force) to 10th graders at a public school, even though she teaches history. Nowhere in the curriculum is there anything about abstinence. So she mentioned it anyway. Live in the presence with God; you will see the right time to speak up. If one door closes, another will open. She says she was let go back in January (not to return after this school year). So she’s applied to different places, and people like her energy and have offered her a job. She was shocked at the opportunity.

Life unfolds even without ‘education,’ or attachments

11:15 Jesse comments that educated people are dumb; he thought he had to be educated to do what he does. Jesse’s life unfolded, differently from how he imagined he wanted. He’s always wanted to know what it’s like to live as a son of God. It’s amazing, and he’s still discovering. The first thing God does is wake you up, then detach you from the world — friends, family, places.

Jesse recounts counseling with a man in Arkansas who no longer likes wasting time being with family members all the time. When you’re in the world and not of it, you’re alone but not lonely. You can live with yourself and not want to commit suicide. Most cannot live with self.

Jesse also does not care what people think of him. We all come from a bad place, born with crazy parents. Stay with the Silent Prayer; don’t hate; your life will change naturally — no fear, doubt, or worry. You’ll just live your life. God loves us. We cannot judge one another or anyone; we have to love our enemies. Even those who turn on you, you cannot hate them.

Don’t overreact. Satan will throw a lot of stuff at you. But stay away from anger. God understands our battle is a spiritual battle. Men gotta wake up; women need you; the world needs you.

Society is a mess

11:22 Jesse says he’s never seen so many husbands afraid of their wives. Kids may ask for help, but the father does nothing to protect them from the mother.

11:24 People will just lie to you and don’t care — including the media. For example, mostly blacks attack Asians nowadays, but liars call it “white supremacy.” How can they just lie like that? An Asian woman on Tucker Carlson on Fox News pointed out the deception in the mainstream. If no one says anything, it encourages the lawless to get worse. Love one another; tell the truth but don’t hate. People close to you will turn on you, but don’t hate.

11:26 A young lady tells a story of a run-in with a Black Lives Matter agitator who just called her Nazi and refused to listen. Jesse urges her to stay calm, no anger, no fear, and one may hear the truth. Don’t do it to make them angry, to point the way to what is right. The enemy in power want us fighting with one another while they stay in their mansions with armed guards. They put us in a jar fighting.

11:30 A man talks about Jesse’s urging of Christians to get involved in politics. He talks about the separation of church and state — but that’s a lie; religion should dictate the laws. Men have to get involved; we can’t keep electing all these women; it’s not in the nature of a woman to lead. He asks how Christians in politics will be united when the Christians are not united.

Man won’t protect his children from his wife

11:34 Jesse talks with a man who once feared dealing with his wife. He says he overcame this, but he does not necessarily tell her how the cow ate the cabbage. Now he no longer lashes out. When she’s doing wrong with the kids he is a little unclear. He’s afraid his old temper may come back. Any man who has anger is a woman. His wife also talks, saying they’re working through it. Their daughter shakes her head no when the wife is asked if her husband corrects her when she treats the kids wrong.

The wife says her husband would rather call the police than deal with her. She says she’s thankful for Jesse, because now she understands what’s happening.

11:40 Their daughter says her father has not protected her from her mother all her life. Instead, the daughter says he told her that he wouldn’t let her get between him and his wife — so he’d take the side of her mother. She felt guilty for calling him weak, and her mother told her not to call him weak. But don’t take it personally.

11:43 The man says he stays out of it when his wife and daughter fight, because he doesn’t want his anger to come back. But once your anger’s gone, it cannot come back. His wife was trying to discipline the daughter, and so he thought he was strong. But the mother should not discipline the children.

11:46 You wake up right away, and then you start getting cleaned up from all of the junk.

The daughter says she does not overreact anymore; she used to cry and stay in her room.

11:48 Mark says he corrects his wife. He says she’s a peaceful lady.

Not having the spirit of anger…

11:55 The man’s wife says there were times he’d act like a woman. Even if you’re angry, you should still say he’s acting like a woman; he may see himself.

11:58 Jesse gives a great brief monologue: If you no longer have anger, you’re no longer afraid of getting angry. We’re in the fallen state because Satan is our daddy. What does born again mean? The woman responds, saying she’s used to being a certain way forever; so Satan tells her she may overreact.

12:02 Jesse talks more about changing and growing. Don’t run from situations; don’t try to create a situation either. And you’ll see your relationship with God.

Mark makes the point that it’s a female mindset of mean or nice, instead of right or wrong.

12:04 One lady talks about dealing with women in the workplace. Don’t try to convince anyone that you’re not angry, or not guilty. You can raise your voice though. Jesse says he loves life being free — free of anger. When dealing with people, stay present so you don’t overreact.

12:10 Hassan, who joined us on The Fallen State, talks about his family’s experience with anger. He forgave his mother and father.

12:12 The younger man’s wife talks again about name-calling. She does not want to get into a bad habit when she’s angry.

12:14 Another young man (the Mexican) says his phone got stolen by a bunch of gangster Mexicans whom he didn’t want to judge. He knew it! Afterward he admits the spirit of anger seduced him. He then asks when people give you a gift, should you accept it? If they’re not expecting anything from you, that’s fine. A friend offered him $300 to party for Cinco de Mayo. He refused, because he’d rather work than party. (He sells candies because he’s a Mexican.) Do not let anyone control you with anything.

12:22 A man asks when it became taboo to talk about how fat women are getting. When men started getting weak.

Another man asks why we can’t see things that are so obvious. His liberal friend, a nurse in a nice home, called him crazy for talking about the liberal-induced homelessness. Yet there was a homeless encampment right in front of his house. When they corrupt the young people, they can make them believe anything! People with degrees are educated out of their mind, with no common sense.

12:26 A woman talks more about fat and skinny men, the notion of body positivity. It’s an attack on good; they want to take your identity away from you so they can control you.

12:28 Another great little monologue: When you forgive, things will change; but you have to admit you’re wrong for hating. Let the anger go. Overcoming anger does not mean you’re weak. Don’t hate yourself for being into pot or whatever.

Fight back in the right way

12:31 The “rowdy” ones now talk. The man says she’s under control now. Because they’re so young, and the internet is out. People hate anyone who wants to do the right thing. The backlash is worse than what they did. When you think you know the truth, but you’re not living in the presence of God, you’ll overdo it. You set yourself up to be destroyed. But God destroys the spirit of the ego, the nature of Satan, and you can do it in the right way.

12:38 After a little girl asks if it’s okay to say “Oh my God,” another young woman asks about taking the Lord’s name in vain, and cussing. It’s a waste of time. When you’re born of God, you’ll speak the right way at the right time. (James tries answering about this issue, and Jesse asks Nick to cover this on the radio show.)

New Biblical Question: Can you earn love and respect?

Jesse asks a few people his new Biblical Question: Can you earn love and respect? One lady says no, but ponders why.

(12:48 Jesse also recounts asking a Jew-hater about the conflict between Israel and the Palestinians.)