We deal with relationships, marriage, and family issues. One lady disagrees that Satan is the woman’s daddy. Don’t cater to black anger.

Church with Jesse Lee Peterson, Sunday, June 6, 2021: We welcome first-time visitors, then take questions, disagreements, and issues from the people. Seek God, and don’t worry about the fallen state in relationships. Is it wrong to say that women are evil? All angry people play God. We talk with a father, mother, and their daughter about the father not correcting the mother. Jesse saw BLM agitators threaten police in a viral video. People are catering to the anger in black Americans, only making it worse!

Biblical Question: Does scripture say to hunger and thirst after Jesus?

New Biblical Question: Does the Bible say that Jesus was angry?

11:03 A man from Riverside who’s listened to Jesse for two years mentions a former pro-basketball player Kwame Brown who’s mentioned Jesse. This man, 25, has not yet forgiven his mother, although he brought to her attention how he’s frustrated around her. He says he’s not naturally angry — his father is not that way. Although he does not live with his mother, he lives with his sister! He looks black but with Mexican hair, or Indian.

11:08 Another first-timer from El Paso, TX, age 23, recounts forgiving his mother. Stay with the prayer, guys — no matter what. This man asks how to grow your business when you’ve just started. Do what’s in front of you to do every day. He dropped out of business school to start his own business, called Brothers Carpet Cleaning (from the El Paso area).

11:12 Jesse then talks with a young lady, 19, brought by a young man who’s attended church many times in the past. She talks about forgiving her mother but not her father yet.

11:16 Tim from La Verne heard of us from his brother in the Lord — Carlos, our street preacher friend. Tim joins us with his wife of 20 years, Lannie (sp) from Indonesia. She says she obeys his husband — when it’s positive. Jesse clarifies to her that you don’t ask your mother for forgiveness; rather you should be sorry for hating her for what she did. She said she had no problem with her dad.

11:22 Yet another first-timer Tim was here for counseling just before the Chinese virus lockdowns last year.

The right mindset for men and women coming together?

11:24 Victoria asks: If God is enough for one person, why did he create the woman for man? God wants to create love through the man, passed on to the woman and the children. God knew in advance and allowed that the man would fall away, subject to the woman. That way, they would marry in the fallen state, make a family, and overcome the fallen state. Don’t worry about having feelings or not; just seek the Father.

Is it wrong to say Satan is the woman’s daddy, that all women are evil? 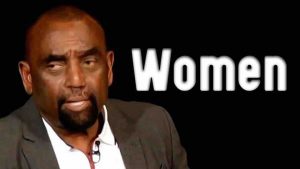 11:30 Another man points out that God created a helper for the man, and so the man was not alone. The woman was not yet in a fallen state, because only later did she listen to the serpent. Jesse points out that Satan is her daddy.

One young lady disagrees, because he’s calling all women evil. So she asks: Where was Adam? So Jesse paraphrases the garden story. The woman is the man’s god, because Adam listened to the woman. And Satan became her god because she listened to him. The man is overcoming the woman, and the woman is overcoming the serpent. She worries that some misogynist men who are becoming more violent with women will take it as justification.

All men hate women because they hate their mothers. She is his god, and he goes crazy, because he doesn’t know how to deal with the hell in her. She wants it to be said more sensitively, not “PC” (politically correct), not in a beta way. The young woman says her friends are born again, but living in a fallen world. Jesse invites her and her friends onto The Fallen State.

11:40 Adrain asks about Satan. At first he was one of the brightest lights, but now he’s pure evil, and was thrown out of God’s house. All angry people think they’re god; their spirit acts that way. It’s the same with abortion supporters and Bible thumpers who judge everybody (we like Bible thumpers though!). We’re not in control of anything; we’re either influenced by Satan, or influenced by good.

Adrian says she notices she’s controlled by Satan through her thoughts; she says she’s going through it. Jesse asks her if she’s kicking and screaming, or just relaxing and going through it. All thoughts are lies. Watch that. Do the Silent Prayer every day and night. The ego would rather quote scripture and lift up holy hands than sit still. Be still and endure. Satan does not want you to trust God. Stop overreacting.

11:49 Adrian asks how to overcome not being good. You’d still be no good, but you’d operate from His good nature. Forgive your earthly father as well. She does not like seeing that she’s evil. Don’t struggle with it; be happy with it.

It’s hard for women to accept the fact they’re evil. She’ll kill the grass, the children, and everything else. But once they get to know themselves and don’t hate what they see, it’ll change. They have a direct link to Satan, whereas men just have to overcome the nature of the woman.

A family on husband correcting his wife

11:55 Carlos’s wife attended a marriage retreat, and heard that women are receivers. She says she’s submissive to her husband, and never gave him a hard time. Carlos says he does correct his wife. He says he controls his anger and goes around her feelings. But no, Jesse points out you can’t control anger — it’s a spirit. You want to overcome it. He says he still wants to keep his righteous anger, so he can speak up against evil.

His daughter says he seems to be afraid of his anger coming out. He let her get away with it because he wants to stay calm. She asks if she should correct her mother for being negative and putting him down, or her father for not correcting her mother. Both!

Carlos also asks about praying for others.

12:09 In response to a question, Jesse says: You should not judge yourself for doing stupid stuff. You’re being controlled by evil. God is changing the heart from hate to love.

12:12 One young lady says we should attack the evil spirit, and not the person. She suggests a man should say, “Get thee out of my house, Satan,” and then tell the wife to pray with him. But Jesse suggests another approach. She also asks about cases in which the man is mentally incapacitated. The wife must still love her husband, and stay away from anger. Stay away from anger, and you can’t go wrong.

12:16 Jesse tells the story of police officers making an arrest in Minnesota. People were cursing at the cops, and threatening to murder the cops and their kids. There’s no fear of cops now, and their hands are tied. With all this anger blacks are overreacting to, no one has told them to forgive their mothers and fathers, and overcome that anger. People are catering to them rather than correcting them.

The world goes out of control when you don’t self-correct, when you’re not aware of the kingdom of heaven within.

12:19 Victoria believes the cops chose not to do anything, out of fear of the world’s perception.

It’s not about slavery or reparations. No matter what we give them, it will never be enough. Call it what it is, evil, and don’t have anger.

Blacks are knocking out the Asians, but blaming white supremacy.

Blacks are cursed. Everyone has evil within, but blacks are catered to. White people are cursed too, because they’re afraid to speak up.

12:26 or later… James reads some YouTube Super Chats questions about forgetfulness and tithing. We also talk more about women wanting Jesse to censor himself, but not knowing how to say it in a way women would accept it.

Biblical Question: Does scripture say to hunger and thirst after Jesus?

12:40 After some responses to the Biblical Question, Jesse answers: Jesus is amazing, perfect in what he did, our brother. But we should hunger and thirst after righteousness. We go through the Son when we forgive. The Antichrist is already here — look at the pulpit in the churches. Get to know God by knowing thyself. Repent and be born of Him.

New Biblical Question: Does the Bible say that Jesus was angry?

Some people say that he had righteous anger, and so they too are angry.

12:46 Joel asks a couple of questions about growing into strength in dealing with situations — such as police with evil Black Lives Matter. He also asks about exorcism, such as when the lady mentioned a husband casting out the evil spirit from the wife.

12:52 Get away from anger; overcome anger. The world will try to control you with this emotional stuff. Stop overreacting to little things so you can grow with big things. Stay with the Silent Prayer. (You can do both!) Thanks, all!

Donate to BOND (see links below). We’ll read your Super Chats on the radio show tomorrow.

Men’s Conference is August 14, in Orlando, FL this year. https://rebuildingtheman.com or https://jesseleepeterson.com We will have church the next day in Orlando, earlier than usual — so ladies can join for Church, but not the Men’s Conference.

Live your life. Let what others think go in one ear and out the other. Be of love, and not of hate.