What it means to confess your sin (1 John 1: 9); the difference between sin and unrighteousness; the intellect’s purpose…

Church with Jesse Lee Peterson, Sunday, June 27, 2021: On Saturday, Jesse spoke at the Black Robe Regiment Conference near Orlando, FL. Two couples join us for the first time: Can the husbands be alpha but have beta moments?

We read from 1 John 1: 9, and explain what sin is versus unrighteousness. It reads: if you confess your sins, He is faithful and just to forgive us our sins and cleanse us from all unrighteousness. The churches think the unrighteous acts are the sin, but the sin is the hatred. Having no anger does not mean you don’t yell, cuss, and fight.

Biblical Question: What does the intellect look like, and what is its purpose? Jesse says that the intellect must go deaf and dumb; it feeds the ego. The Holy Spirit teaches us all things.

We also have our annual Men’s Conference on Saturday, August 14, 2021, in Orlando, FL. https://rebuildingtheman.com/events

Jesse spoke near Orlando (Maitland), FL, at the Black Robe Regiment Conference this weekend. He talks about a man Jeffrey Younger, a Texas father whose wife is changing his young son James into a so-called “transgender girl.” The government makes major money when they force men to pay so-called “child support.” Most of the money does not go to the mother, much less the child.

Jesse comments that the people at the conference were nice, but intellectuals.

A young lady Angelica reads 1 John 1:9, which says: if we confess our sins, He is faithful and just to forgive us our sins and cleanse us from all unrighteousness.

11:15 Angelica says her husband found Jesse on YouTube, and they’ve listened for the last two years. She at first thought Jesse was a woman-hater. She’d forgiven her father in 2011, and her mother in 2015, but realized she still had anger and hate after listening to Jesse.

Another first-timer Sandra also didn’t like Jesse at first. Her husband explained a little to her and she listened again. Her husband Fabian grew up hating his father without realizing it. His friend Alonso (sp) told him that any man who has anger is a woman.

11:24 Sandra says her mother was really controlling, even now calling every day! She’s in the process of telling her to calm down and stop that. Her father asked for forgiveness. Jesse recommends forgiving her mother, and then blocking her. You have to be strong, just don’t have anger; that’s what love is. They have three children, the oldest 18.

11:28 Alonso says that his friend Fabian and he are alphas but have beta moments. But he sees it. That’s all you need. Alonso says he wants more understanding of the ego, because he gets frustrated at times. When frustrated, relax, come back to reality. Don’t judge yourself. Satan will lie to you in your thoughts — lies all the time. Alonso’s brother is MMA fighter Henry Cejudo, who co-hosted the show with Mike Tyson, who interviewed Jesse (episode to be released later). He’s having a child soon, so Alonso hopes he heeds Jesse’s message.

11:33 Once again, Angelica reads 1 John 1:9, which reads: if we confess our sins, he is faithful and just to forgive us our sins and cleanse us from all unrighteousness. A man says this verse is commonly quoted in recovery groups (such as Alcoholics Anonymous). He said it didn’t really work until he heard Jesse’s message about going and forgiving your parents.

11:37 Another man said you should do this every day.

11:38 Jesse recounts talking with people after his talk at the Black Robe Regiment Conference. Many women and men sought to raise their children Christian, but things turned out wrong.

The man talks about forgiving others their sin versus confessing your own sins.

11:41 Samuel talks about how Christians intellectualize that verse to mean sharing their problems with everyone — Oprah mess!

11:44 One time, Joel shared his stuff on Facebook; his father asked why he’d do that, but only a year later he realized it was wrong.

11:45 Jesse says millennial men are worse than the women. He talks about some of the speakers, some of them females preaching. Growing up prior to moving to L.A., he never heard a female speak about Jesus or the Bible. So it seemed strange and out-of-order for women to preach that way. One married female preacher still had her last name! And her husband sat there, so weak. (Jesse jokes about God and Jesus getting their cafe mocha; God’s getting a large one because it’s getting worse.) 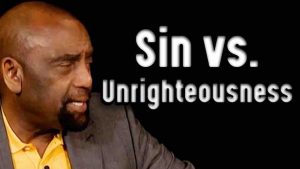 That’s why Jesse tells the gays and lesbians that those things are not who they are, but what they do in a fallen state. So many people judge themselves. Once you forgive, you can never sin again. God replaces that evil spirit with his spirit.

11:51 Jesse brings up when Donald Trump said that he doesn’t ask for forgiveness for his sin. Once he realizes that he’s done wrong, he doesn’t do it anymore.

11:56 It’s an honor to be a Christian — a blessing, a gift from God. That’s why it’s hated. There’s no other religion they’re trying to get rid of! It’s the only religion Jesse knows of that requires you to repent, that causes you to look at yourself and realize you’re wrong.

11:58 A young lady Linda talks about how she used to share her business. Jesse brings up Oprah again, I believe. Stop it. People will judge you forever.

12:00 A young lady asks about waking up and catching oneself overreacting. If you continue down that path, is that when you become a son or daughter of God? She still catches herself getting annoyed, although she recognized the truth of what Jesse said right away. Will she eventually get rid of that, if she endures rather than lashing out? That’s the stuff that God is cleaning up. See it and be still; don’t overreact; “amazing” is coming.

Sometimes her daughter will accuse her of being mad. At first, she’d apologize, and sometimes she gets irritated at the comment, but now she tells her she speaks up to make her do right. That’s why people said Jesus was mad, because he threw over the tables in the White House. People said Trump was mad after he took over after Obama. But they do not know.

12:10 Jesse talks with Alonso who complained about thieves in Arizona about telling off his evil neighbor without anger. This is why the Bible thumper Christians are getting walked all over by the children of the lie.

12:12 Jesse makes fun of a man wearing a hat in the building.

12:13 Nick repeats the Biblical Question: What does the intellect look like, and what is its purpose? One young lady says the intellect reminds her of the ego: You think you’re better because you understand or know more, but it doesn’t mean anything.

Another young lady talks about the heart, with an answer Jesse finds remarkable. Kelly then talks about the intellect making you feel like you’re God and can judge. Nate says that the intellect looks like a way to salvation, but it’s not real. People are so convinced of it, their ego so strong, convincing them that they have the right way to salvation.

12:19 After Jesse tells a funny story about Nick flying First Class, Nick answers the Biblical Question. He says that if man had never fallen away from God, we would never have needed an intellect.

12:21 Adriana gets interrupted briefly when Jesse notices a young man holding hands with his girlfriend in the front row. The young man also cut his hair! He’d never seen this man with a woman before. Anyway, Adriana answers the Biblical Question further.

12:27 After another couple of people talk, Jesse gives an encouraging word. More ladies also talk about the intellect. A man gives the example of the intellect leading people to chop people’s parts off to pretend to be someone else.

Bigg Bump and Ermias also talk about the intellect.

12:33 Jesse says that the intellect has to render itself dumb and deaf. It thinks it sees the truth, but does not. It does not realize that God allows us to see. Of itself, it knows nothing. Let the intellect go. It will not let you see the truth of things. The intellectuals are smart, but deceived. The purpose of the intellect is to deceive you, because it’s not real; it’s from Satan.

The one thing Satan does not want you to do is be still. God wants you to be still. God causes you to surrender the ego; the purpose is to make you think you’re better than others, to judge and get mad. If you think someone is judging you, you’ll judge them back. When you confess your sin of hating, playing God, he will clean up all the unrighteousness. Satan uses the intellect to deceive you. Just like fake love, which comes from hatred — is emotional, intellectual, all ego.

When people stop doing the Silent Prayer, they fall into the lies of the intellect.

12:40 After Ermias makes a brief point, Jesse reminds us: the Holy Spirit will teach us all things. It’s not normal to have doubt, be depressed, or be suicidal.

Jesse encourages people to do the Silent Prayer, even if they don’t like him. It’s not his prayer. Stay with God. Be still and know Him. All this will come in stillness. Stop overreacting, like the disciples in the boat with Jesus.

12:44 Nick tells the new Biblical Question: Do you believe history repeats itself? Jesse asks: Does history repeat itself? A father and son at Church give their answers, as well as Samuel (“the Holy Ghost”). Sandra too answers the question: She does not think it does. (Jesse remarks again at how young and fit the 36-year-old wife and mother looks.)

Thanks, all! We have our Men’s Conference next month, and our first Thursday Men’s Forum this Thursday, July 1st — which is White History Month!