Christianity’s hated because darkness hates light. Biblical Question: Are you a slave to your thoughts? Stop trying to control things.

Church with Jesse Lee Peterson, Sunday, July 24, 2022: Christianity has under attack since Jesus’s days (Christ who raised Lazarus), because darkness hates the light (John 11: 39-48 and John 3: 19-20). // We welcome first-timers, some of whom know nothing about JLP! // Biblical Question: Are you a slave to your thoughts? (Jesse discussed this at the Women’s Forum on Thursday.) One man gets exhausted reading and seeking knowledge. A newcomer feels crazy with the battle between her “higher and lower self.” Another driven man calls his mother every day. Can you be “too present”? //

After Nick reads from 2 Corinthians, which says the letter kills, but the Spirit gives life, Jesse makes his point: You’re not in control. If you ever have fear or doubt, you’re a slave to thoughts. Reality is within, out of thoughts. Let life happen; lay your weapons down. You’re not protecting yourself, but the ego, the not-you. //

CLIP: If You’re Emotional or Intellectual, You’re a Slave to Thoughts (15 mins) 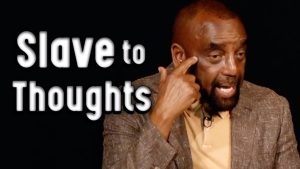 11:01 We start streaming a little over a minute after the top of the hour as Nick gives announcements.

11:02 Jesse opens Church by talking about Christianity under attack since the days of Jesus. Jesus raised Lazarus from the dead. He told Martha, I believe, that she could have done it.

Christianity is the best religion, because it heals the sick, heals you of your fallen state. A magazine Jesse read said they wanted to kill Jesus because the darkness hates the light. The children of the lie today want to destroy you so that you do not promote love. Christians are so weak.

The leaders of the world feel threatened by Christianity, but not other religions. But Christians are running in fear.

After the man reads from John 3, Jesse says the darkness hates the light. Your family will go after you. It’s not you whom they hate; don’t argue or fight with them. They cannot see what they’re doing.

You can stop being a slave if you want to. There’s nothing new today: Authorities want to control you, as they did in Jesus Christ’s days.

They’re not worried about the lukewarm Christians.

11:17 A young lady Alex joins us from out-of-state with her male friend. Donovan first saw the “Jesse Lee Peterson SAVAGE Moments” series (by the YouTube channel called Get a Job). He has gotten closer to his father, but has not forgiven him, because Satan is talking him out of it — nor has he faced his mother. He thinks it’s his thoughts talking himself out of it.

11:22 Another newcomer from Florida, Spencer, also doesn’t know what this meeting is about, like the young lady. Jesse asks him if he has anger; he says he’s become content with himself.

Biblical Q: Are you a slave to thoughts?

Jesse urges people to pay attention to themselves, what’s happening within them.

11:27 A man says he recently converted to Christianity, and a fellow Christian female friend asked, “Isn’t it exhausting?” He’s into reading, researching, and getting into knowledge, being desperate. Jesse notes that it’s difficult for intellectual people to let go of that addiction-like impulse.

11:34 One man says he is still a slave to thoughts, as it “picks the lock” and sneaks into his house, in a manner of speaking.

Another man says he’s not a slave to thoughts, but he illustrates an example of imagining conversations with a boss.

11:37 Jesse goes back to the man who’s into research; he remembers the rules he was taught as a kid. He’s forgiven his parents and does the Silent Prayer.

11:39 Jesse then gets to a young lady who says yes, she’s a slave to thoughts. Pay attention to yourself. Seek first the Kingdom of God, and His right way.

A second young lady says that Troy helped her realize she need not think about what to say (“bullet points”) in a situation in advance.

Are there two ‘yous’ in one body?

11:46 The newcomer woman Alex doesn’t think she can achieve perfection, but would like to be able to deal with thoughts rightly. Jesse asks her why she thinks there are two “yous” in one body. She has a higher self and a lower self which is a slave to thoughts. Jesse asks: How did you become two people? The higher self wants to overcome, and then there’s the real her — so there are three! Have you ever wondered: Who am I talking to?

She’s never asked her father or mother. She doesn’t like asking who she’s talking to in her head out loud, because she doesn’t want to sound insane. Every human being is crazy, going through these conversations within.

She says she forgave her mother; her thoughts told her it wasn’t a good time — she listened to that for a long time. When she went away for college, she realized her mother wouldn’t be around forever. (She’s always had a good relationship with her father.)

11:53 Yet another young woman talks about making an excuse not to go to the gym.

Another young woman still says yes, she’s a slave to thoughts. She’s tempted to stoop down to someone’s level, which is from Satan.

One of the first-timers says negative thoughts will drive him away from what he wants. Jesse asks him: Where do you get the thoughts to be successful from? He wants to be the best. Is that a free thought? Is it freedom to compare yourself to someone else? He compares his current self to his future self. Where is the future? The future’s in my head. What is it like not to be fulfilled? His body reacts in addition to only his mind. What makes you think being successful will fulfill that? He hasn’t talked about this with his father.

This man, Spencer, says he’s closer to his mother than to his father, although he’s very close with both. He calls his mother every day (or at least 4-5 times per week) to decompress from work and check in on her. He’s 21, and his mother has a heart condition.

12:06 Jesse asks the man’s friends about calling their mothers and being crazy.

12:09 Jesse asks the man Spencer if she’s forgiven his mother for the little annoyances. He doesn’t feel she did anything wrong too differently from others’ mothers. She wanted their best interests, although she sheltered them, not allowing them quite enough freedom when they were younger. He says the past molded him. Jesse asks: Are you surprised because you’re emotional like your mother? He loves being close with her.

12:15 After a man talks about having a screaming child inside, Jesse says the hardest person to forgive is mama. The man does not regret what he’s become though.

12:17 A man who answered earlier now realizes that he is a slave to his thoughts. Hassan says he’s a slave to the now, realizing we’re a slave to Satan. He says knowledge is at war with wisdom. People want to feel good, but we don’t want to be good.

Another man says he’s not a slave to his thoughts; he is so in the moment, sometimes to his detriment. He’ll wake up and forget his scheduled client meeting until an hour beforehand.

The letter kills, but the Spirit gives life

12:25 Jesse has Nick read from one of the Corinthians from Paul about knowledge and the Spirit. In 2 Corinthians 3, Paul asks if he needs a “letter of recommendation,” but compares the people to the same, written not on stone, but human hearts. The letter kills, but the Spirit gives life.

Let it go, all that you’ve learned. Then you can see. You’d just live.

How many worry sometimes? How many fear sometimes? Do you think about what others think, get lonely, or have doubt?

12:28 Hake and another young woman talk about being a slave, and about being in the intellect.

12:30 Jesse continues, saying that any of those doubts and emotions show you’re a slave to thoughts.

When you’re thinking and feeling, it seems real, but it’s not. Reality is within, out of the thoughts. All thoughts are all lies, all the time, about everything. There is no future; there is no past; that’s an illusion.

When you protect the ego, you’re not protecting you, but are protecting the not-you. There is no feeling to the real you; but you don’t know who the real you is yet. Watch the thoughts, and let them pass. Do the Silent Prayer.

12:37 A man Troy talks about true faith when tested.

JLP: You’re not in control

12:39 Jesse urges: Lay your weapons down, and let the war happen. Of ourselves we can do nothing, and of ourselves we know nothing. You’re helping the Devil destroy you. Let it happen, whether it’s good or bad. Keep your eyes on yourself, and you will see. Stop trying to control anything. Nobody in this world is in control of anything.

Get up and wash the dishes; go workout. The Devil talks you out of doing what you want to do. God keeps us in the moment, and we do what we need to do in the moment without effort. Be still and watch the thoughts, and stop identifying with them. Forgive your mothers for recreating you in her image, and your father for not protecting you. The Light of God will take care of it.