20 Nov Everyone on Earth Is Jeffrey Dahmer

Do you see you’re evil? Every human is Jeffrey Dahmer. Keep mind with body, not in thoughts. BQ: Are you responsible for your own life?

Church with Jesse Lee Peterson, Sunday, November 20, 2022: A father continues to be distracted by son’s “silent treatment.”  //  Question: Do you see that you are evil? A mother admits she’s imposing. A man deals with fear at work.  //  Every human being who believes thoughts is a “Jeffrey Dahmer.” (One woman protests this.) Jesse saw a documentary showing the serial killer talking.  //  Keep the mind with the body. Do not respond to thoughts or attacks from others or from inside you.  //  It’s hard for people to admit they’re evil — not them, but the Devil possessing them. Go through the pain.  //

Passion is a false feeling. Feelings, both good and bad, are imposters. That’s not you.  //  Have you been keeping your mind with your body? The Devil does not want you to be still.  //

Next Assignment: Self-comments… When you get a thought, ask who gave you that though. When that thought is followed by a feeling, say it’s not you feeling that. Practice this to become more aware, and not lost in thought and feeling.  //

ANNOUNCEMENT: Our office is closed Thursday and Friday for Thanksgiving. We’ll do the radio show Thursday morning, but not Friday.  //  Do the Silent Prayer.  //

CLIP: Who Gave You Your Thoughts? Your Feelings Are Not Yours: Assignment (6 min) 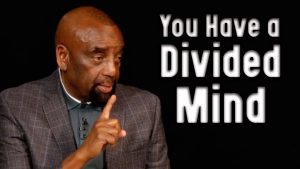 WATCH CLIP  YouTube  |  BitChute  |  Odysee  |  JLP’s two cents on his #BiblicalQuestion – Are you responsible for your own life? And this week’s assignment: Self comments when encountered by a thought, followed by a feeling…

11:01 AM US PST We start streaming a minute after the top of the hour.

11:02 A father who spoke last week continues to complain about the “silent treatment” from his 20-year-old son. The father betrayed his son’s confidence by telling women in the family that the young man was suicidal. Jesse asks him, If you can’t see you’re wrong, how will you ever help him?

Q: Do you see that you’re evil?

11:16 Jesse asks: How many people still get angry at times? Do you see that you’re evil?

11:19 Jesse asks Doug: What would happen if you saw that you were evil? He thinks it’d free him up.

11:22 A mother admits she’s imposing, such as on her daughter who wanted to wear sandals with chippy painted toenails. At 11 years-old, just be an example. Some things you don’t allow your children to do. With other things, let her do what she wants.

11:25 Another mother relates to the first when asked: What do you see that’s evil about yourself?

Every human being on earth is Jeffrey Dahmer

11:28 Jesse was watching a Jeffrey Dahmer in-his-own-words (or something) documentary. Every human being who believes thoughts. (One woman protests.) Your actions are evil. God said that anyone who has anger is a murderer. Anyone who would put his son’s, friend’s, husband or wife’s business in the street is a Jeffrey Dahmer.

11:31 Hassan reflects on Jesse saying Black Lives Matter is worse than the KKK. We are a soul, not the body. The Devil doesn’t want you to see it.

Jeffrey followed a thought, and it got worse, and worse. The mother when pregnant with Jeffrey was angry and on medication. She didn’t want anybody to touch him, and she rarely touched him. The parents broke up because she was so angry; the father couldn’t protect Jeffrey from the mother, because he was nice and weak. Experts offered Jeffrey medication.

11:36 Hassan reiterates: No man is good except God alone. Jeffrey may have started out with animals. (Jesse goes into detail about what Jeffrey did to human beings.) He admitted something was driving him. Paul said the same: It’s not me, but the spirit that made a home.

Hassan talks about our attempts to try to fill a void, getting married to make a family — only adding to the problem! Jeffrey started with a thought.

Keep the mind with the body

11:41 A man talks about staying conscious, keeping your mind where your body is.

The thoughts give you ideas and answers that are wrong.

Jesse’s advice to the father’s son

11:46 Franky talks about anger and filling the need for love. Jesse points back to the father who’s destroying his suicidal son, and angry at his son! The father calls the son immature.

Dealing with thoughts and attacks

11:48 James asks a super chat from YouTube: when someone yells at you or attacks you with words, do you just stop and observe and not respond like Christ?

Jesse says anyone who gets shy, you’re worshiping the Devil. You’re evil. That’s not a normal state of being. There’s no shyness in God, but only love.

Doug says anything is possible when you follow thoughts. Never say you would never eat a dead body. You would.

Jesse advises the 11-year-old daughter not to identify with anger as you.

11:53 A young man argues with Jesse that calling the young man evil is just Jesse’s opinion. Jesse agrees to one thing: Don’t let me convince you at all.

Hard to admit you’re evil; not you but the Devil in you

11:56 Jesse talks with a young woman about the light shining. The hardest thing in the world is for people to admit that they’re evil. You’re fighting for your life.

11:59 Talking with an older mother, Jesse advises her: Once you truly see it, you’ll see you’re not evil, but the thing in you is evil. The intellect is evil. It’s all the same spirit.

12:02 Jesse urges the woman not to take the walk at work when people get to you. Stay in the pain. Christ said, Forgive them; they know not what they do.

Passion is a false feeling. Feelings are imposters

12:04 James asks another Super Chat question: Is passion for anything a false feeling? Jesse talks about a friend who wanted to be somebody in the world.

Jesse talks about people getting help on the show versus not: They’re both imposters, taking credit from it. Jesse watches to see what he feels about both thanks and insults.

Have you been keeping your mind with the body?

11:07 Jesse asks some young people for their feedback. A mother talks about being aware.

The highest form of prayer is to be still, Jesse says. The battle has been won. If you don’t love all (including your enemy), you love none. Love simply means don’t hate them.

The Devil doesn’t want you to be still

12:13 Jesse asks a first-timer his feedback. He has not started the Silent Prayer. The Devil will not let you be still. They’re not your thoughts; they’re the Devil’s thoughts. Get to the point of no thoughts — only practical thoughts to deal with physical things.

12:14 A woman asks about dreams. She dreamed about Jesse at one point! She dreamed for three months that someone would hold her hostage. Then she says her ex-boyfriend held her at gunpoint, and pistol-whipped her — and she bled from the head.

BQ: Are you responsible for your own life?

12:19 Biblical Question: Are you responsible for your own life?

The Devil talks to you about the truth

12:20 Jesse says: The Devil will let you hear the truth, and then will talk about the truth to you, and you think it’s you. So Jesse advised a friend: When the conversation is over, don’t keep having a conversation about it. It’s just like the Devil quoting the Bible to you.

Child: Yes, I have chores to do.

12:21 A little kid says she is responsible for her own life because she has chores to do. (Maybe it was a little boy — not sure!)

A mother speaks, and then another young lady.

The light destroys the darkness

12:25 Jesse explains the light of God will destroy the darkness. That’s why salvation is of the heart.

Why do you believe you are or are not evil?

Jesse then asks the hands of those who do believe, and who do not believe they’re responsible for their own life.

There is no you. The Devil is divided.

There is no yesterday or tomorrow. You want to be whole. Stop putting titles to yourself.

12:32 When you take off flying in an airplane, at first all you see is clouds. But when you get above that, you see clearly.

12:33 Jesse gives the next assignment: This week, do self-comments. When you get a thought and a feeling, ask who gave you that thought, and say the feeling is not you. Everything starts with a thought. (Also: Continue to keep your mind with the body.)

12:34 Jesse urges to stay with the silent prayer. Watch yourself. If someone makes you feel good or hurts your feelings, relax in it and know it’s not real. It’s an illusion, feeling up and down. Most love living that way.

The office is closed Thursday and Friday for Thanksgiving. We will do a live show Thursday, but a replay on Friday. Happy Thanksgiving! Stay on the straight and narrow. Don’t look back nor forward.