27 Nov When You Look Outside for Answers, You Abandon Yourself

Posted at 14:27h in Church by James Hake 0 Comments
1 Like
Share
BOND: Rebuilding the Man · When You Look Outside for Answers, You Abandon Yourself (Church 11/27/22)

Let memories go: Keep mind with body. Story of an evil family. Do you ever abandon yourself? Question the Devil’s thoughts and feelings.

Church with Jesse Lee Peterson, Sunday, November 27, 2022: A father seeks feedback on a text apology to his son. He hated his own late father! Let thoughts and memories go. Do the Silent Prayer.  //  Have you been keeping your mind present with your body? People run from the present, from God, and identify with emotions.  //  Jesse met with a family who protected the mother’s ego out of fear, while judging the son who forgave her. Yet they all do wrong themselves! They later admitted the one son is right about the mother’s ways.  //

Biblical Question: Do you ever abandon yourself?  //  Thoughts never leave you with just one idea, but create a past or future. They make you look outside for answers, not simply inward to see you’re wrong. Slow down, and let thoughts pass.  //  A documentary purports to reveal things left out of the Bible: Only believe in God who is above and within you. // 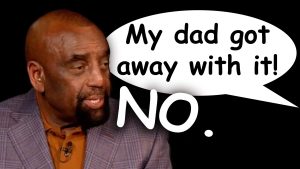 WATCH CLIP  YouTube  |  BitChute  |  A man says he lacks common sense because of a bad upbringing he blames on his father.

10:59 AM US PDT We start streaming about a minute before the top of the hour.

Father who hates his father’s son hates him

11:02 The father who betrayed his “suicidal” son’s trust reads a text apology requesting feedback. This man admits he gave the same “silent treatment” to his father for 24 years, and his dad died. He’d said he didn’t care when he heard his dad attempted suicide on his birthday. Now he’s sad he missed his son’s birthday.

11:11 Jesse encourages him to drop it now. Don’t keep apologizing. It’s on him now.

Jesse advises the man he’s worshiping the Devil by holding onto memories about his father.

11:18 The man asks what the number one purpose of the Silent Prayer? To give up, stop fighting with the Devil.

11:18 A young woman talks about the Silent Prayer as well.

Identifying with emotions: Running from the present

11:20 Jessea asks people if they’re keeping the mind with the body. One man catches himself drifting off. He talks about people identifying with emotions, particularly in the black community. Women push emotions, Jesse says.

Jesse says anger is an animal nature. It’ll snap at any moment. That’s why people think animals love them, because they have an animal nature that they need to overcome.

11:26 Jesse asks another man if he’s been doing the assignment, keeping the mind with the body.

11:27 Super chat: A man asks why the Silent Prayer has to be done sitting with the hands up. Jesse says that it doesn’t.

Jesse points out that the ego nature is pure evil. Jesse tells a story of visiting a family who’s joined forces with the mother after one son forgave her. It turns out they were just too weak to go against the mother. The others publicly spoke ill of the man, but they themselves were into all kinds of mess themselves! Finally they admitted the mother was wrong as the first man said.

You want to get to a point in life where you have no thoughts at all. In all honesty you have no problems.

BQ: Do you ever abandon yourself?

11:35 Jesse asks the Biblical Question: Do you ever abandon yourself? A few people answer,  including Hake, Doug, Franky, and Hassan.

11:40 A man says he does when he gets caught up in his ego. Another says he caved into his thoughts and emotions. The father says he’s not perfect: he gives into negative actions and feelings. He says he’s retarded. Anyone who has anger is retarded, Jesse says.

11:42 Nick says the idea of the question doesn’t make sense. But he relates to forgetting to be aware.

11:44 Nick talks about keeping the mind with the body.

You never had anyone’s trust. Betraying self.

11:45 Franky talks about losing the trust of a person, and difficulty getting it back. Jesse says you never had the trust of the person. They never did trust — it was an ego relationship. They wanted something from you.

Franky talks about doing things against his own will or interest

Assignment: Self-comments: Thoughts, feelings are not you

11:48 James and others talk about Jesse’s second part of the assignment: Self comments. When you get a thought, ask: Who gave me that thought? And when an emotion follows: That’s not me feeling that.

11:56 As Doug talks, Jesse interrupts:  Work on yourself. “Faith without works is dead.” This is hard work. It’s not this easy way the church has been telling you.

Fond memories are from hell too: Thoughts not you

12:03 In talking with Alexis, Jesse says the “fun” and “fond” memories are straight out of hell, too! They’re not from God. Once you think about them, you’re gone.

Don’t run away from the nothing moments. Relax.

More people talk about questioning the Devil when he feeds you thoughts and feelings.

12:10 Jesse asks one young woman if she ever abandons herself. She compares this Thanksgiving to last Thanksgiving.

12:12 Jesse talks with the young woman more about the family he met with.

Franky talks about being calm in a situation.

Thoughts never leave you with just one idea; they create a past or future.

12:16 Jesse says thoughts always try to create an opposite. While you’re thinking about one thing, it’ll create another. It won’t let you just have one idea. Have you noticed it always creates a past or a future? The Devil is of time, and God is of the present.

Nick says the thoughts argue both sides. Jesse gives the example of the Devil giving the father the idea to get feedback from others. All he needed to do was see the truth that he was wrong.

12:19 A young lady and Jesse talk about thoughts in traffic situations. Thoughts are evil.

12:20 A man talks about holding thoughts captive, and forgiving his dad.

JLP: When you look outside, you abandon yourself

12:22 You’re not guilty of anything. You’ve never done anything wrong. God’s not judging you. Satan is. You have no problems — you’ll see when you live in the present. Everything that’s happened has never happened to you, but to the false ego “you” that you identified with.

Anytime you look to the outside for the answer, you abandon yourself. The Kingdom of Heaven, God’s Love, Nature, and everything is with us already within. In reality, you’re already free. You don’t need to be shy or put people on a pedestal.

When you hear Elon Musk is the richest man in the world, you compare yourself and feel poor. Jesse grew up “poor,” but never wanted for anything. Listening to thoughts, women will be online taking off their clothes for money, as people use them for their own gratification. Doctors prescribing medication for spiritual issues — that won’t work. The real you is not possessed, but the fake you is.

12:28 Jesse advises the father to watch thoughts and feelings, rather than listening to them and panicking. You’ll create a situation that you imagine, fed you from the Devil. The man appreciates Jesse’s wisdom and our Church meetings.

The Bible versus salvation within

12:32 Jesse talks about seeing a documentary about the Bible, and what’s changed over the years. You lie to yourself that you believe in God. Because if you did, you wouldn’t believe the Devil, being lost in emotions. We already know the truth, but as long as you have faith in anything but God within, you’ll be lost.

Salvation is of the heart. The vices of the ego nature will be taken away from you. Go and forgive. Do the Silent Prayer, morning and night. Practice keeping the mind where the body is. Work on it. Faith without works is dead. Work on overcoming the Devil.

Men’s Forum + New BQ: When do you know you’re strong?

Jesse briefly asks the tentative new Biblical Question: How do you know when you’re strong?