Church with Jesse Lee Peterson, Sunday, October 18, 2020: It’s going to get worse before it gets better! Biblical Question: What does it mean when Jesus said: Out of 1,000, I will choose one, and out of 10,000, two? A husband and wife are separated, and her mother’s over-involved! Is it important to keep a relationship with family? 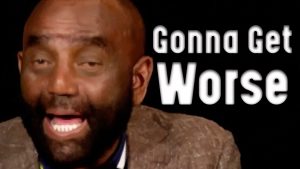 It’s going to get worse before it gets better — for white people, for men.

After greeting a first-time visiting couple, Jesse gets to the Biblical Question: What does it mean when Jesus said: Out of 1,000, I will choose one, and out of 10,000, two…?

One man Jason gives feedback on the Biblical Question, and talks about his own life, having come across Jesse’s interview with Amber Rose and Jesse’s Savage Moments compilations by the Get a Job channel. He’s the husband of a woman who joined our Women’s Forum this past Thursday. They are separated, but attending Church together. The wife recounts forgiving her mother after the women’s meeting Thursday. She works for her mother!

Jesse encourages the married couple to move back together, but the lady, Jessica, is not sure. She does not trust him, and does not want to be “vulnerable,” because he hurt her in the past. Where’s the past? “In my mind.” It does not exist. It’s hard for women to let go of their ego. She says she trusted him completely but remembers when he was in the “super fallen state.” She gets into her thoughts sometimes. Doubt every thought. Let the thoughts go. If you believe one thought, Satan is your daddy.

Her mother is over-involved

He mistreated her, and she mistreated him. If she forgave herself, then she should be able to forgive him. Jesse urges her to get away from her aunt, her mother, the “strong women” who influence her. She’s on a mobile phone app that she calls “Life 360,” on which her mother tracks her movement and asks her where she’s going! Jesse strongly urges the man to take his wife away from her mother immediately! She says that there are financial ties.

She says that they fought for seven months straight, before she finally left him. But that’s why you have to do things right. No sex before marriage, no living together until marriage. Don’t marry an educated woman. That’s why you went through hell. But now it’s over, and you’re supposed to overcome and forget about it.

He believes that her grandmother is his favorite person in the world, and they think her mother is nice, and not a mean person. But she’s afraid that she won’t get over it, because Christmas is coming. She feels peace about him taking her back, but her mind goes crazy about it — Satan talking to her.

An older man gives feedback relating a story from his marriage and outside family members. The couple talk more about the situation. Don’t take advice from failed people! Jesse says: Throw mama from the train!

Is it important to keep a relationship with your family?

After a caller who forgave talks about his family history, Samuel answers the Biblical Question.

Another man talks about his new beliefs and relating with his adult children who have trouble with his beliefs, and are becoming more distant as a result. Let them go/suffer. He’s afraid that they may not be saved before death. But he can’t save them. Jesse also advises him on forgiving his mother, apologizing for judging her — not for disrespecting her. The emotional crap will disappear. He still has his mother’s identity. He says that he gave his soul to Christ very recently, and did not know about Jesse; he’d left Catholicism at 12. Facetime mama! Look within.

Jahleel from Massachusetts calls-in to tell about forgiving his father, who has diabetes and is on dialysis. His dad cried when he recounted things from his past, and is a beta male and believes in racism. Now he can’t dwell on the things that he resented his parents about. But he says he has anger still, because he supports the Great White Hope (President Trump). He’s 31, and he loves his country more than ever. He asks Jesse why racism does not exist. Jesse has to cut him off, as time is short! 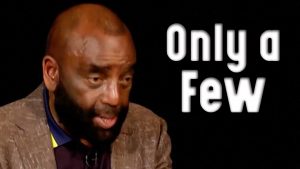 Jesse then answers the Biblical Question, saying that it’s not easy to be born again of God. The heart is really wicked. You can go forgive mama and daddy, and you’ll feel better. But you’ll find yourself overreacting when a situation comes. Even most people who do the Silent Prayer, they are a mess! Once you’re born again of God, it’s impossible to overreact to situations. Only one or two truly get it! When you’re a son or daughter of God, you wish everyone well, and don’t think negatively of them.

Radicalism in the culture 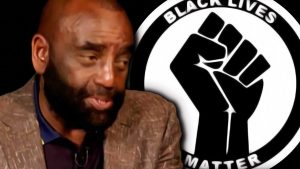 Jesse then gets to a first-time visitor Zaher (sp) from Russia, age 21, who relates with what Jesse talks about, losing friends. He’s a writer, but does not want to write subliminal messages for corrupt Hollywood. He points out that fist that everyone’s promoting is communist propaganda. His father died two years ago, and he’s still angry at him. He used to get beat up by Mexican kids and called a Nazi just for being white.

Jesse has Nick recount an audio guy with two dogs who got angry at Jesse’s statements in an outside interview. The audio guy said that he got beat up by blacks in a black neighborhood where he grew up. So now he “loves” what he hates.

Getting to some last questions and comments, we start wrapping up.

New Biblical Question: Is it good to love your weakness? One man says he’s super critical of himself. That’s a woman’s way of thinking! Never let your wife know your weakness. Do the Silent Prayer!