Don’t judge yourself and others; don’t tell your vices! The outer world vs the inner world: Everyone’s the same.

Church with Jesse Lee Peterson, Sunday, November 14, 2021: Two young women “know” they need to forgive their mothers, but hesitate. A young man brought his ex-girlfriend, and judges himself for his vices. He’s not praying! There is an outer world that deceives you, and an inner world where God put the Kingdom, the truth. The world has people sharing their vices, and judging themselves and others. God said to forgive and forget. How do you see Jesse? Do you see BOND as a cult? We are all the same. Doubt every thought! 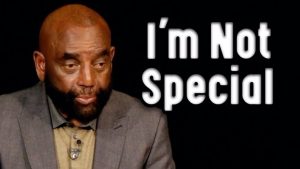 Pray without ceasing. Don’t share your issues. We all are born in sin. Speak the truth to the lie. Doubt every thought.

10:59 AM US PST – We start streaming just before 11 AM and Chris gives preliminary announcements.

First-timer ladies know they need to forgive their mothers

11:02 Jesse welcomes first-timers. One young woman loves Jesse’s cadence and good attitude. She loves her father, but still has not forgiven her mother! She’s tried to speak with her, but she fights back. She watches Jesse every day.

Another young lady joins us for the first time with her cousin, never having heard Jesse.

11:07 Yet another young woman joins us with her male friend. Something inside her told her to stay with it, although she did not understand Jesse at first. She says she’s working on forgiving her mother. Jesse encourages her to face the fear (face her), rather than wait to muster up the courage. We need people of love and courage.

Young man and his ex-girlfriend, judging himself, not praying

11:12 The young lady’s friend Ali heard of Jesse from a Ukrainian friend five years ago. He’s trying to get to the place where he can consider himself a man. At 30, he just moved out of his mother’s house this year, after getting his degree and a job.

He met Marisa (sp), the young lady, online during the pandemic. How can they get back on the right track, after starting off wrong? We’re all born in sin, Jesse explains. True forgiveness is to forget. He asks if he should apologize for being a beta. They dated for a year, and then he decided to be single for a while. He’s been alone for two months now. He’s in Monterey now; they’re originally from Modesto.

He’s wondering whether he should continue not dating. He judges himself for “sinning,” continuing to do wrong. Stop judging it so that He will cause you to overcome it.

11:22 This young man is not doing the Silent Prayer. He feels that he’s settled into going the wrong way, like he’s stuck in it. Jesse reminds him it’s a spiritual battle. He asks about forgiving people. He’s still believing his thoughts, Jesse points out. Do the prayer so that the light can shine on the darkness of the mind, Jesse urges him. Thoughts are wicked!

11:29 The young lady also talks again. She too is not doing the Silent Prayer. You only grow when you overcome difficult times, Jesse poins out. Pray without ceasing.

11:31 Another first-timer talks briefly, saying he disagrees on a minor thing, but does not elaborate. He does not do the Silent Prayer, and calls it a good question why.

The outer world convinces you to put your vices out there! We’re all the same! But the outer world tells you to believe in racism, sexism, and divides us, making people feel better than one another, blaming one another.

It’s the heart, not the vices. In the old days, people knew not to spread it. Christians are being trained by the world, and doing it in a worldly way.

We’re all the same. Everybody has something to overcome. Some overcome, and others don’t.

11:39 A man asks if kindness also creates stillness in us. You should be righteous; God will cause that to happen when he changes your heart. If you try to be kind to get along or make it in the world, it won’t work.

11:41 The first young woman who talked today says she went to a mega church where people told their vices to one another. What about therapy? Both are wrong. They’ll give you medication! They don’t tell you that it’s you; they say it’s someone else. The only reason we suffer as long as we do is we refuse to forgive! You can’t make yourself overcome the vice.

The young lady asks what returning to the father means; she says she’s gone to Jesus many times, because of her conditioning.

So Jesse explains the Adam and Eve story, explaining how the woman became the man’s god. So God sent Christ, so that we could believe back into the Father.

She asks whether Eve slept with the Devil. She finds it hard to believe that Eve ate an apple (or whatever fruit).

She also asks about music. Music is no longer Jesse’s identity, but he likes music and singing. God does not want you to get an identity from it, to replace that over Him. (She completely mishears Jesse multiple times in a really funny way.)

How do you see Jesse? Any sign of a cult?

11:55 She answers how she sees Jesse, as an older, wise man. Jesse asks her if she sees him differently from how she sees others and herself. Everything you need is inside. He gave a kingdom within. She’s never heard a pastor speak the truth.

11:58 Jesse asks Hassan: How do you see me? He admits he feels he loves Jesse more than others. But he says he sees Jesse the same as he sees himself. He thinks Christ was a mirror — and Michael Jackson, and others. His girlfriend would accuse him of copying Jesse.

Another young woman Linda admits at the beginning she went to Jesse, instead of her husband whom she did not trust.

12:06 One man says he sees Jesse as an older brother. You’re lucky to find one or two confidantes in life. He says he doesn’t see Jesse as different from

Bigg Bump aka Derrick sees Jesse as a wise man and older brother.

Marlene sees Jesse as an older uncle, an example. Jesse asks Marlene: Do you see BOND as a cult?

12:11 In another great monologue, Jesse explains why he asks that. People like him until they get mad at him, and then call it a “cult.” God judges differently from how the world does. We’re all the same.

What you see in Jesse is the Father working through him; you can appreciate him, but don’t put him on any throne. Help out, and help us to help others. Same thing with Donald Trump; Jesse has the utmost respect for the president. But keep a space, so when you disagree, you don’t turn on him. Examine yourself, why you’re angry at Trump or Jesse. You made him your god; he didn’t tell you to do that. Doubt every thought; thoughts are wicked; there’s no truth in thoughts. You get mad, and feel right about judging, and want to condemn them!

Everybody who has anger is brainwashed. You overreact to things you shouldn’t overreact to; God does not want you to overreact; he wants you to be still and know. Seek Him, come back to Him, and He will guide you.

They want to change the language from pedophiles to “Minor Attracted Persons” (MAPs).

12:26 Watch the thoughts. Every thought is a lie, all the time. They treat women as special! One young lady talks about the lack of chivalry, which she blames on “equality.”

12:29 A man asks if Jesse really believes all thoughts are lies. (Jesse moves on and “runs” as the man starts to get carried away with his line of thinking.)

Jesse urges people to listen to the Teacher within.

12:32 A man brings up that people in the fallen state live like animals. He says he was “run over” while riding his bike to Church this morning! When you overreact, you’re dying.

12:34 One man Dathan talks about people falling for leaders, and wanting to be controlling. Now Jesse sees everybody the same.

12:36 Jesse urges people to do the Silent Prayer. He can tell now when Satan is talking to him.

12:37 Hassan makes a comment about pastors. God said: Let no man teach you. Trust no angry person; they have a heart of stone.