At Church, Jesse Lee Peterson shares examples of people being hypnotized. People who believe the Bible is the Word of God are hypnotized. It’s hypnotism to convince women that abortion is okay, saying “my body, my choice.” It’s hypnotism to believe in the Bible, to “study to show thyself approved.” Anyone who has anger is blind and does not know the truth. Let go of all expectations.

In this service, a man shares his gratefulness for BOND’s monthly Men’s Forum, particularly this past month’s meeting.

Jesse also answers the Biblical Question: Where do you get your identity? 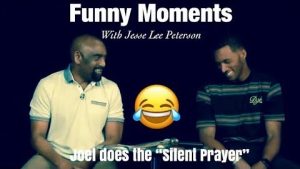 Also catch this funny moment from Church this Sunday: Jesse Roasts Joel For Falling Asleep On The Job

Jesse tells of counseling with a father and his children. The children told the father what he was doing that bothered them. They explained it perfectly, but the father would not accept it. The father could not see that the way he was caused his children to respond in the way they did. He does not know himself. People do not know themselves — they’re hypnotized and don’t know it. With that, Jesse asks people: Are you hypnotized? He later goes on to give examples of people being hypnotized.

Is the Bible the Word of God?

After asking people about being hypnotized, Jesse asks how many believe that the Bible is the Word of God. (One guy whom Jesse called a good “Bible thumper” talks about wanting to be an actor, and then giving up on it; he thought it was his calling. He talks more later.) One man quotes John 1:1, which says that in the Beginning was the Word, and the Word was with God, and the Word was God. His wife too feels that the Bible was the Word of God.

Jesse then explains the hypnotism: Suppose a few people, Jojo, Mo, and Larry write letters to one another. Then they put it together in a book and call it “The Bible.” After a while, people start to believe that’s the Bible and that it’s the Word of God. Does that seem like you might be hypnotized — to believe something that might not be true, and that you don’t know for yourself?

The intellect is not of God. And you cannot make yourself believe in God. Once you can admit you don’t believe, then God can reveal Himself to you.

Anyone Who Has Anger Is Blind

After Jesse explains these things, some people bring questions and comments. One young woman thanks Jesse for his message that helped open her eyes to things.

Then a man Raymond speaks up and says that it does not make sense to believe that the Bible is the Word of God. In response, Jesse asks him: Have you overcome your anger? The man admits that he still has a little anger.

So Jesse points out: Anyone who has anger is blind. If you have anger, you don’t know that the Bible is not the Word of God. Before you enter the Kingdom of Heaven, you must forgive.

Some more examples of hypnotism: A woman can be convinced to kill her child in the womb, because of the deceitful statement: “My body, my choice.” It’s not her body. That’s hypnotism.

Many Christians who are into the Bible quote the verse that says something like: Study to show yourself worthy. So they think that means they should study the Bible, and then they feel worthy or approved of God. But their lives don’t change! That’s hypnotism.

One man asks Jesse his explanation of the verse that says: Be angry and sin not. Jesse explains that you should discern, for example, that abortion is wrong. You speak up about it. But you leave the emotions and anger out of it. If you get angry at it, then you accept it. You become attracted to what you hate.

A young man admits that he’s not over his anger. He forgave his parents, and went to them, but his anger is not gone. He was not afraid to confront them. (Jesse jokes that he wasn’t scared because he knows Karate or Judo, since he’s Asian.) He catches himself judging people, and he has expectations on them. So Jesse tells him: Don’t have any expectations. Live, do your best, and have a good attitude without expectations. His parents divorced, and his mother was teaching him early in life.

Jesse repeats: Let all expectations go. We don’t know what we want or need. Of ourselves we know nothing and can do nothing.

Another man speaks up about a young person making a poor decision. He gave the young person some Christian-sounding advice, but it’s unlikely to be effective.

Jesse says that Jesus and God are watching the world on TV, drinking their lattes, and laughing at how crazy the people are. Jesus came down from God and put everything back together, but we make it complicated — by having expectations.

One mane speaks up and thanks Jesse and all of the men who attended the Men’s Forum early this past month. He learned a lot from it and put some things into practice!

Have an attitude of wait and see.

Where Do You Get Your Identity? (Biblical Question)

Jesse asks several people: Where do you get your identity? This was his Biblical Question of the week this past week. Some say they get it from God, and cite intellectual, “logical” answers as to how they know. But people get their identity from everywhere, relationships and things. Jesse talks about how the Old Testament is still going on in the outside world, including what happens as society accepts homosexuality. But the New World is inside. When you let go of the things outside, God is within us, and you get your identity from Him.

Do the Silent Prayer, speak up, but don’t resent. You will change and have perfect peace. Watch yourself.