NOTE: The first minute-and-a-half of the video is silent — Jesse’s mic was muted before we officially started!

We dealt with a middle-aged man going through divorce, a woman not on the same page with her fiancé, overcoming issues without suffering, anger, beta males, Slender Man, and Iyanla!

A man talked about dealing with a divorce. His wife still pushes his buttons, whereas he thought he had peace. Jesse advised him: Don’t live in your thoughts, and don’t judge yourself. She complained that he didn’t cherish her, even though he tried to put her first. So Jesse urged him: Never cherish a woman, because she will see you as a weak man. He called it an “emotion trap.” Just allow yourself to grow.

This man wants to date, because he feels lonely and wants companionship. But Jesse tells him: You’re not lonely for a woman; you’re lonely for God, for perfect peace. At age 63, this man still wants to have sex! Sex is not love! His grown daughter and adult children should not want him to get with another woman. It won’t make him happy, but miserable.

Woman is not on same page with fiancé

A woman disagrees with Jesse about nearly everything, including sex not bringing happiness. Jesse asks: What’s the purpose of marriage if not for having children and a family? Your sex will get old, and then the man will go out and cheat. Instead, date and wait 7 years with no sex before marrying. Her fiancé seems just to want the sex, seeing marriage as a way to claim, “That’s my booty.” They see a counselor, but that won’t work. The woman believes that everyone has their own truth, but human beings don’t have truth. They get caught up in emotions and do wrong.

Jesse asked his Biblical Question of the Week this past week: Is there a way to overcome your issues without suffering? Various people answered. Jesse says yes, absolutely. In the light you can see all things, but you must let the anger go. In your fallen state you suffer. For example, ladies should stop trying to change men. You cannot even change your children! 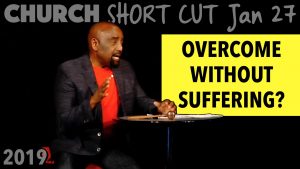 (Watch 4 1/2-minute short cut: You Can Overcome Without Suffering)

Jesse brought up a report he watched on TV yesterday about a fictional character named Slender Man. Children read about Slender Man and try to summon him, and carry out crazy acts. Three girls in Wisconsin went into the woods; two of them named their victim Bella before trying to stab her to death — believing they did the bidding of Slender Man. Psychologists and lawyers attempted to say they only had issues with their brains. But they’re possessed — medication will not solve a spiritual problem!

Satan wants you more than God does! All of this is spiritual.

Jesse also told about seeing an episode of “Iyanla, Fix My Life,” by this woman Iyanla Vanzant. A mother told her daughters that their father raped them when they were children. But it was all lies — Iyanla rightly had them take a lie detector test, and it came out that the mother lied! Unfortunately, the mother never admitted to lying, and Iyanla did not press her to admit she was wrong! Iyanla also told the father that he did not have to forgive the mother, which is not true. He and the daughters should forgive the mother, and then have nothing to do with her — she’s evil! The mother has so much hatred for the father, such that she’s willing to destroy the children to get back at him.

It’s a spiritual battle of good versus evil. Forgive your parents, especially your mother, and your father for being weak. We all have done dumb things, such as have sex out of wedlock, become violent, or not defended ourselves when we should. Some men have been hit by women, and because of false societal expectations, did not defend themselves!

Overcome your anger. It’s wrong to be emotionally attached to others. Don’t hate your fellowman. Men, the world needs you, but men try to please women more than they try to please God! They do this because they have not overcome “mama” and they want sex.

One man asked about dealing with gossip at work. Never trust a gossip, and do not allow a person to gossip. And never trust an angry person — their nature is of Satan, and they will turn on you.

Another person asked what it means to pray and watch.

Jesse talked about the new pro-abortion law passed in New York by a black woman Andrea Stewart-Cousins. Abortion is evil, and everyone knows it’s wrong, but they make excuses. But Jesse says: I don’t blame the evil people for doing evil; I blame the good people for allowing it to happen. Greater is He that is in us than he that is in the world. Perfect love casts out fear.

In this country, it’s okay to be black, Indian, brown, whatever, but it’s not okay to be white! Jesse admonishes one man not to be silent, but to speak up even in class: Don’t let “education” be more important than what’s right. Don’t be afraid to speak up.

Jesse told the story of Travis, a producer for The Fallen State, wearing a T-shirt that said something like “white and proud.” He shouted, “White power!” at the end of the Women’s March in Los Angeles, and all the people surrounded him like demons to attack him. But people can be any other race, and it’s no problem!

Some people discussed the Catholic school students whom the media smeared, including Nick Sandmann who smiled in front of the American Indian activist.

Whites are under attack, because most whites are afraid. With fear, you will be destroyed. Overcome fear by overcoming anger. Start standing up to evil. God is with us!

A man talked about attending “Blexit” event — blacks and Latinos leaving the Democrat Party. One speaker said we should put women on pedestals, to which this man and some friends shouted, “Beta!” And it stopped the crowd from cheering the speaker! This man said that many conservatives are also beta males and RINOs.

The people did not have many questions, but just came to listen. So Jesse urged them: Don’t have leaders! Come with questions. Then afterward, people start talking about their knowledge. But instead, be slow to speak, and start living it! 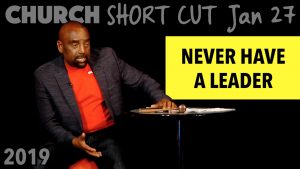 (Watch 2-minute SHORT CUT: Never, Ever, Ever Have a Leader!)

One man asked about anger: In Colossians 3: 8, it says to put it away, whereas other verses seem to be okay with anger. But Jesse says that the Bible has been tampered with according to the times — one version says, “Our Father and Mother which art in heaven…” so you know that’s wrong! The word of God is written in your heart. Anger is a judgmental nature. So just live. Just be.

Go and forgive your mother!

One man believes that his issue is with his father, and that he loves his mother. But his fiancée says the root is with his mother. Another lady, their friend, approached her mother about having given her pot at age 12! But she’s still afraid of her mother, because she told her mother, “Jesse wanted me to ask you…” instead of asking for herself! The ladies talk about their “strong moms” who hated them.

Do not put too much meaning into dreams. If God wants you to know something, He will reveal it to you and make it clear. You won’t have to wonder.