At Church, we talked about the white female cop sentenced to ten years in shooting her neighbor after mistaking him for an intruder. Can you disagree without getting upset and having it affect your relationships?

First, Jesse talked with a number of first-time visitors to church, how they heard about BOND, and why they came. Some talked about their different beliefs about Christianity and the world. A couple even believe the earth is flat! Many young people are starting to believe this, as well as getting into information about hidden messages about President Trump and the Bible. Jesse urges them that the information that’s out in the open is plenty to deal with. He does not encourage getting into the issues of the unknown.

This past week a white woman was sentenced to ten years in prison for murder, after she apparently mistook a black man in his apartment for an intruder into her own! Jesse asked people what they thought of the situation. The media was all over it. There was a black judge and mostly black jury. Some say it should have been manslaughter, or punishable with fines and removing her from the police force. One man says ten years is good. But would a black man have gotten that if he’d done it to a white person? No.

Can you disagree without feeling?

Jesse then asked people if they feel differently about a person when in a disagreement, if they can disagree without changing the friendship. Many people have different experiences with this. One man says he can disagree with friends but does get upset in disagreements with his girlfriend. Many men are afraid of women, and have made the women their god. After you’ve been born again, you’ll get to where you can have a disagreement and not be upset, not feel anything about it.

Watch how Satan talks to you about those things. Every thought is a lie.

Parents can and should even have arguments in front of their children, to show them how to deal with conflict.

Biblical Question on cause and effect

Jesse shared his new Biblical Question for this week: There is a cause to every effect, What is the cause of your effect? Watch that this week. It’s so amazing what you will discover. 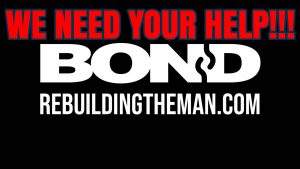 BOND is going to be moving locations after nearly 20 years renting our current building, and we’ve been raising money since September. So far we’ve raised over $121,000. Initially, we thought we would lease our next building, but we actually want to do it right and buy a building, to own it outright. We put a lot of work into our current building which we’ve occupied since 2000, and want to be able to do whatever we need to do and not have to worry about the owner, or being forced to move.