Jesse urges people: Live right and be right. He asked the Biblical Question: Do you discriminate? Be honest with homosexuals. Regarding Joe Biden: Do you trust what you see with your eyes?

TALKING TO NEWCOMERS: LIVE RIGHT, DO RIGHT, BE RIGHT

At Church Sunday, Jesse started out talking with newcomers. A 24-year-old was still living at home with his parents. Jesse urged him to move out. (Watch 5-minute Short Cut: 24 and Still Living with Parents?!) Another first-time visitor Eva from Germany, brought her sister. Some of these people found us via “Jesse Lee Peterson SAVAGE Moments” series by the YouTuber account Get a Job.

A 17-year-old girl was unsure about whether to go to college — her brother and mother joined us as well. Jesse urged her: If you’re not sure what to do, do nothing. As the time comes, you’ll know what to do — and if a deadline passes, it wasn’t meant for you. Some people make a decision from uncertainty, and it ends up being wrong. (Watch 5-minute Short Cut: College… Don’t Know What to Do? Do Nothing.)

One young woman lives with her boyfriend — and the boyfriend is G. from San Diego! G. excused living with her by saying, “I stay prayed up,” rationalizing that it balances out with his wrongdoing. He says that he’s going to marry her anyway, so he decided that he should “go into hell to get her.” He mentions black Israelites believing that sex is marriage, so he pretends he’s already married to her. Jesse warns G. that he knows better and that he’s going to suffer for doing wrong knowingly. (Later in the service G. acknowledges Jesse’s right. Watch 10-minute Short Cut: G.’s Living with His Girlfriend??)

Jesse’s Church online producer James asks some “Super Chat” questions from YouTube viewers: “What is sex before marriage? No intercourse or no anything?” “Does everything happen for a reason? Is there such a thing as ‘God’s plan’?” “After you’ve forgiving your parents, is that when you are truly saved?”

BIBLICAL QUESTION: DO YOU DISCRIMINATE? 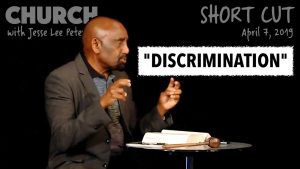 Watch 15-min. Short Cut: Electing Evil to Rule Over Us: “Discrimination” and Brainwashing

Jesse talked a little about his Biblical Question of the week last week: Do you discriminate? People gave their feedback. Some say they do, while others said they do not.

One man comments about the intelligence and cunning of evil. How do you fight this invisible battle against evil? Jesse answers: First you must wake up within. Don’t give in. The Great White Hope (President Trump) does not cave to evil people.

Jesse talked about the BOND Couple’s Seminar which occurred the day before. He also pointed out that one woman in Congress is living with her boyfriend (Alexandria Ocasio-Cortez calls him her “partner”). People voted for her knowing this about her!

A woman watching online asked (through James), “Is there a difference between discriminating and discerning?”

Another woman admits that she was a “beta mother,” angry and impatient. She wanted to shake her son to make him turn in his homework on-time. But now she surrenders the responsibility to discipline their son to the boy’s father. She’s much happier now. Boys and girls know how to manipulate mothers (and weak fathers who have their mothers’ nature). So by age 3, it’s best to let the father take over the role of raising the child, especially in terms of discipline. After a while, the children stop listening to the mother. (Watch 5-minute Short Cut: Kids Don’t Listen to Mothers After Age 3.)

Yet another young woman asked about her 18-year-old brother in high school. She’s concerned that he is not working nor preparing to move out in September. But her mother had her move out after she became an adult. So if the boy is not ready, let him move out and let him suffer — but drop it and stay out of the way.

She also asked how to deal with employees who are older, since she’s already a manager at age 21. Jesse urges her to treat them as she’d want to be treated. She doesn’t feel they respect her because of her age. But if that’s the case, it’s on them. Take the proper steps if they fail to do their job.

A man says his generation was influenced by TV — especially with how corrupt it’s become. Parents should not allow their children to watch TV for the most part anymore.

TELLING THE TRUTH TO HOMOSEXUALS

One lady said she and her husband used to visit a homosexual couple who were friends of theirs in Palm Springs. Now if they ask again, if they refuse because they don’t agree with their lifestyle, the homosexuals may feel alienated. But the truth is more important than their feelings. Honesty is more important than a fake friendship, if they reject you for standing on your principles. They don’t care about your feelings — they flaunt their “gayness.”

But her husband doesn’t see it as a big deal affecting his life. He says he’d swim in their pool, but he has said things to them about morality. He says it’s an old man with a younger man, so they’re not having “sex.” Jesse says that this is what’s wrong with Christians — they won’t make a stand on what’s right, but just say, “It doesn’t affect me.” (Watch 9-minute Short Cut: Should We Still Stay with Homosexual Friends in Palm Springs?)

Another man visiting for the first time, Richard, spoke up and said that he believes they’re “born that way.” He thinks God made homosexuals to be that way. He’s a Christian. His wife disagrees with him, but his daughter agrees with him. He claims he used to be “homophobic,” having grown up in Detroit. So Jesse says he became attracted to what he hated — to approve of it out of guilt. Homosexuals are hurting themselves. You should love them as your own children. (Watch 10-minute Short Cut: “If God Didn’t Like Gays, Why He Make So Many of ‘Em?)

A young lady from the San Francisco area said her school was a “safe space,” anti-racist, and she’s the only girl who’s completely straight. She said her best friends and classmates are things like “bi,” “pan,” “gender-fluid….” Jesse told her not to worry about it.

JOE BIDEN: DO YOU TRUST WHAT YOU SEE WITH YOUR EYES? 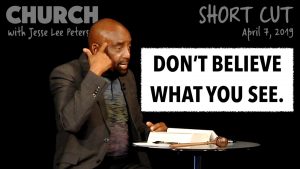 Jesse asked people: Do you trust what you see with your eyes? Some said yes, while a number said no. People have been accusing former VP Joe Biden of being “creepy.” They base their opinion on videos of him being affectionate with women and children in photoshoots. Women have come out accusing him of “sexual misconduct” or something. Never trust what you see and hear. As you judge Joe Biden, so you will be judged. Don’t do unto others what you wouldn’t want done unto you.

One man G. said that he knows not to trust his eyes. He told the story of seeing a photograph that he thought he recognized, but was wrong. But he trusts what he sees spiritually, and hearing what Jesse told him earlier in Church today, he knew Jesse was telling him the truth.

Jesse took some final questions from people (both on and off-air). He announced that we will not have our usual Women’s Forum this month, as he will be out-of-town. For people in San Francisco, he’ll be up speaking on the 18th. Contact BOND with your info so that we can give details, in case you’re able to attend.