February marks the 29th anniversary of BOND! Jesse tells about a lying organization called Right Wing Watch that falsely stated that Jesse said something that he did not say! They said he told a caller on his radio show that a supposed “rapist” father should raise the child who was born from the alleged “rape.”

Jesse reiterated that perfect love casts out fear. A man watching online gave a “Super Chat” donation and said he’s 34, living with his parents, and feels lost over a girlfriend. Move out at 18! Free stuff kills the nature of human beings, both children and adults.

Anger at your father is really your mother’s anger

A lady felt mad at her alcoholic father, but Jesse explains it was her mother who set her up to resent him, making herself appear like the victim. But women know weak men, beta males, even when they marry them. And angry people do not have love, so if you have anger, you do not love your father or mother. Her mother set her up to identify with her. Do the Silent Prayer (audio also available) and get to know yourself.

This lady also asked about her disagreements with Jesse: Is it good to call people names such as “beta”? It’s good without anger.

Sex is not love!

One thing she agrees with Jesse about: Sex is not love. It should be a quick, “Bam, bam, thank you, ma’am.” It’s for making babies. 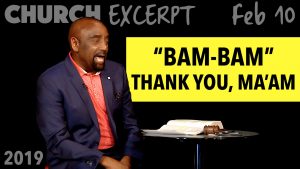 Another woman disagreed with Jesse when he says: Kids don’t want stepparents. She thinks a couple of young men in their 20s who had stepparents turned out well. But only the real parents can connect with the child in the way they should. Human beings know each other spirit-to-spirit. Forgive.

One lady is dating her boyfriend who’s also in attendance. You should not have sex before marriage. The young man disagrees.

We read from a Bible passage in Ephesians 4. Let the anger go and forgive, because anger is a spirit. You cannot take the anger away by yourself.