Why do you want to be right? “Good deeds” bring evil. Human nature is the Devil’s: You’ve done nothing wrong. Don’t try to solve inner pain.

Church with Jesse Lee Peterson, Sunday, September 25, 2022: A man says bad parents bring trouble into the world. // Biblical Question: What’s wrong with being wrong? (If there’s nothing wrong with it, why do you want to be right?) // Nick reads a purported G. Brock Chisholm quote on world government. // Be willing to stand alone. It’s rare to find an individual. A young woman was an accomplice to her own spoiling mother’s murder by her live-in boyfriend! Christians bring trouble “helping” Africans and the homeless. //

Human nature is evil, not good. You have never done anything wrong. You are possessed and driven by spirits. There is no free will, no autonomy. Parents force children to say “thank you” for ego. Human nature is the Devil’s nature. //

When you have inner conflict, do you look at the problem, or look for a solution? For a day or week, try this: Look at the problem (not practical work problems), and don’t try to solve that pain. //

New Biblical Question: What does it mean to sit in judgment of yourself? //

CLIP: Look at the Problem; Don’t Look for a Solution (2-min) 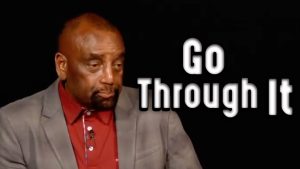 Assignment: For a week, when you experience inner conflict or pain, that’s a problem. Look at the problem and go through it. Don’t look for a solution. See that every “solution” you come up with only creates another problem. WATCH CLIP: YouTube | BitChute | Odysee | Rumble

11:02 AM US PDT We start a couple of minutes after the top of the hour.

11:03 The man who talks about his work trouble spoke up about bad parenting, and whether God allows people to suffer.

11:06 Jesse asks him the Biblical Question: What’s wrong with being wrong?

11:08 Raymond says when you’re wrong, you run away from reality.

A soft-spoken woman answers the Biblical Question. She is bothered by certain people’s opinions.

11:21 Another man says being wrong can cause strife, such as two years of “Covid” mandates. He feels that, being diagnosed with mental illness, that being forced to wear a mask is not good for his health.

11:24 One lady thought about the biblical question a lot. You can’t help someone who doesn’t want to be helped.

JLP: Be willing to stand alone

11:26 Jesse invites the Anchor Baby (Nick, host of nickstream, who did not stream this week) to read a quote shared by Anna from Missouri.

Psychiatrist Dr. George Brock Chisholm (1896-1971), the first director of the UN WHO, purportedly talked about achieving world government. He talked about removing from the minds of men God, family, and individuality. Germany in 1918 embraced socialism, and families broke apart.

The purported quote: “To achieve world government, it is necessary to remove from the minds of men their individualism, loyalty to family traditions, national patriotism, and religious dogmas.…”

11:29 Jesse says it’s rare to see individuals who are willing to stand alone.

They’ve destroyed individuals, and the family. Within 50 years, Christians will be a minority in our Christian country!

Story: Parents are to blame

Jesse agrees with the first man who spoke today, that if the parents were right, the kids would be right.

11:31 Jesse covered a story on the radio show in which a mother raised her daughter to rely on her, living at home. The daughter had children out of wedlock, and the mother would take most of her welfare money. She hated her mother. The mother did nothing to make the young woman responsible.

The daughter seduced a younger man, who lived with the girlfriend and the mother. She got pregnant, and the mother secretly convinced the girl to have an abortion, against the man’s wishes. So the man killed the girlfriend’s mother, beating her nearly to death. The girl helped the boy put her in the car trunk to die.

When you help someone, you’re creating an enemy and not a friend. They’ll turn on you.

11:38 Jesse also saw how Christians bring free stuff to Africa, undermining business there. Similarly, in Los Angeles and elsewhere, the Christians feed the homeless, and spoil them with shelters.

11:40 Whites have not told blacks the truth. They’ve been afraid to say it, or felt guilty. So blacks have turned on them. Whites have given blacks everything, free education and food and money. But blacks are attacking whites.

Men are living with their mothers at 60 years-old.

Human nature is evil. It’s not good. Everything you do has a hidden agenda, whether you admit it or not. A nice person has never done anything good. Good deeds don’t change a bad nature. God has forgiven us. But the nature has to change. Every human being who has not overcome the evil nature has a hidden agenda.

It runs deeper than you imagine. You’ve so identified with it. The moment someone disagrees with you or tells you the truth, you hate them.

The higher consciousness is love. It will allow you to see the fallen nature, the lower consciousness. Everything you do comes with a thought, and then a feeling, and then you act. There is never a reason to listen to thoughts. You’re worshiping the Devil. You misinterpret the Bible.

Once you start allowing love, you overcome illusions, you die, and the real you rises and lives. People won’t know you’re free inwardly.

Inwardly you know you’re wrong. He will show you that it’s not you. The real you does not have fear and doubt. You’re possessed. It’s not you. But it feels like you. You have never done anything wrong.

Feedback: You haven’t done anything wrong

The man talks about free will. He says God gave us autonomy. Jesse asks: What’s autonomy? Did you choose to be evil? Did God give you the choice to be evil? So where’s the free will then? (Adam listened to the evil woman, the evil nature in her. So the woman became the man’s god.)

Do you have a free will? He’d never heard that our thoughts are not our own.

12:04 Jesse explains to the man: We don’t have a free will. They talk about parents such as mothers forcing kids to say, “Thank you.”

12:07 Jesse asks another young lady if she thinks we have autonomy. She talks about committing to prayer.

Human nature is the Devil’s nature

12:08 A man talks about doing the silent prayer consistently. Becoming still is also being present, he says. Jesse says human nature is the Devil’s nature. It’s not us. We’re possessed with spirits.

The man talks about going unconscious and overeating with Oreos. The Devil steps aside and lets you see you’re fat, and has you then judging that, and overreacting!

Don’t go unconscious even when giving in to temptation. The light will change the nature. Awareness will cause you to resist the temptation. The more you do it, the more you can stay conscious. The Devil will talk you out of sitting still and doing the prayer. You will be able to see and resist temptation.

Raymond talks about thoughts versus awareness. If you inwardly see that you resent, that’s different from intellectually “seeing.” Nothing changes with the latter. Raymond says we bear responsibility for how we choose to respond to the thought. We don’t own anything. But the ego makes you feel you own things, such as your kids. If women understood they did not own their bodies, they would not give in to abortion. Raymond curses in church, but apologizes.

12:20 Jesse asks Hassan: Do you look at the problem or the solution? Hassan makes some points.

12:23 A man talks about living at a camp at Zuma. Jesse talks about blacks going downhill after the government started taking care of them, and took the fathers away. They have more “freedom” today, but are also more enslaved today than ever. The man drags his feet about getting a normal job.

Do you look at the problem or solution?

12:28 Jesse asks more people: When you have a problem, do you go for the problem or the solution?

When one lady did have problems she’d look at the problems first. She’d dwell on the problem and judge herself, but then would look for the solution.

12:31 One man says he does not really have inner conflict.

12:32 Jesse urges you to give this a try for a day or week. He interrupts himself to ask Franky about it.

Look at the problem, don’t look for a solution

12:34 Jesse urges: Anytime you have inner conflict, look at the problem. Don’t look for a solution. Sit there and go through it, and just look at it. Notice that every time you have a solution, you’re just creating another problem. It will be overwhelming at times.

The Devil has us trained at looking to solve inner fears.

12:36 Jesse asks his new Biblical Question: What does it mean to sit in judgment of yourself?

If you want to be free you have to become an individual. Stay on the straight and narrow. Be still and know God.

We have counseling and books at BOND. Thanks for the support!