Church with Jesse Lee Peterson, Sunday, August 30, 2020: Thanks to all who joined the Straight Pride rally! A man nearly 60-years-old recognizes a “hindrance” of fear in facing his mother! We discuss the “Hail Mary” Catholic prayer and belief that Jesus is God. Do you believe in the Bible? Do the Silent Prayer and know yourself. Biblical Question: Does human rank mean anything to you? Nick reads Matthew 22: 15-22. Next week: What the Kingdom of Heaven is like…

A recent guest on The Jesse Lee Peterson Show, Duran talks about his date Thursday night. He almost brought her home to his house, but at the last minute decided to do the right thing and not do it.

Jesse tells the guys not to talk about his eyes, saying that he does not wear contacts, but he does have blue eyes, mixed with brown. He also touches on his past with pot and alcohol.

We then get to newcomers — a young man for the first time, and a father of three, married twice, joining us the second time. The latter has not done the Silent Prayer. He asks about forgiving his 80-something-year-old mother. At nearly 60, he experiences a “hindrance” in facing his mother — afraid of her!

Do you believe in the Bible?

Franky quotes the “Hail Mary” prayer taught to Catholic children, calling Jesus God. So did God have sex with the Virgin Mary to make himself? No, He made his Son.

One man disputes Jesse and insists that Jesus is God. Jesse asks him: Do you believe in the Bible? He’d never thought about it in that way. Jesse explains that Jesus is the Son of God, and has God in him, but he’s not God. Jesus said: Don’t worship me; it’s not me, but it’s the Father in me, and greater works shall you do.

Another first-timer’s cousin brought him. Jesse asked him: Are you a slutmaker?

Another man grew up perhaps Messianic Jewish, but his family did not tell him about Jesus.

Jesse answers a couple of Super Chats about overcoming food, and about what to say to a person you’re going to forgive.

A lady believes in the Bible

Should We Believe in the Bible and the Trinity? (20 mins)

She says reading the Bible brings her closer to the Spirit of God. She goes astray when she gets away from it. Claudia says she’s been hurt by people in the church. Jesse urges her to do the Silent Prayer. She says God gave us emotions. No! You’re emotional because you’ve fallen away from God. She disagrees that God is dispassionate. She thinks love is an emotion. Jesse explains that love is a light unto your feet; it’s not emotions at all. She asks where she can do research. Jesse urges her to pay attention to herself. Look within.

A guy says that he sometimes experiences anxiety and depression. It’s abnormal for men to feel that way. Any man who goes through that is a woman! He still lives with his mother at age 26. He felt hesitant to indicate whether he had a job, saying he works Doordash and Postmates. He and Jesse discuss his father and mother.

After that, Jesse thanks a man for giving him T Relief for his foot. And it has no pot! He gave up his pot farm! 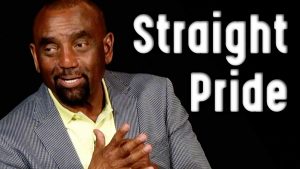 After talking briefly with Grace, Jesse talks about the Straight Pride rally in Modesto, CA. Thank you all for showing up! This year, we outnumbered Antifa and Black Lives Matter! We ran them off! Some of the guys shouted F— Antifa. Others shouted F— Black Lives Matter! Overcome your fear and anger, and you’ll see the children of Satan have no courage. 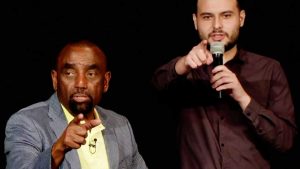 Does Human Rank Mean Anything to You? (Biblical Question, 12 mins)

The Biblical Question of this past week: Does human rank mean anything to you?

A lady talks about Jesus’s second coming as she says is laid out in Revelation. But Jesse points out he already came back a second time. So would that be a third time? She is asking for clarification, because she thinks she disagrees with Jesse. But if you don’t know, don’t let the ego try to force you to know now. Leave it as an “I don’t know.”

Going back to the Biblical Question, different people respond, including Nick (on-stage) and Doug. Nick then reads Matthew 22: 15-22. Jesse then explains that it’s a way of controlling you. People deceive you with their ranking. It’s just a way of controlling you. When you’re born again of God, you overcome words. Don’t be caught up with titles. That’s one reason Jesus had no fear.

Next Sunday Jesse hopes to talk about what the Kingdom of Heaven is like — it is amazing! You cannot even imagine it. There are no words to express it.

Thank you, all! No new Biblical Question today yet, but hopefully tomorrow.

Do the Silent Prayer, doubt every thought. Life will be amazing.

We have the best counseling on this side of heaven.

Men’s Forum this Thursday, 7 PM at BOND in Los Angeles!

Thanks again for coming to the Straight Pride rally Saturday!

Donate to BOND. We need it. Thanks again!