Today’s Sunday service is available to view on YouTube (above), Facebook, and Periscope. See links below for audio podcasts.

Church with Jesse Lee Peterson, Sunday, September 6, 2020: After a few opening questions and comments, we talk about the question: Can you sin as a Christian? A well-known TV preacher John Gray admitted to cheating on his wife. How would you feel if he were your pastor? Should he stay or resign? Did he sin?

Jesse also has a conversation with a mother about apologies and forgiveness. We talk about white Americans being forced to admit they have “privilege.”

Amazing Men’s Forum this last week — over 50 guys joined us! Thank you.

A first-timer named Jeremiah, 22, and his friend, a young lady Eliza, talk briefly with Jesse. Another first-timer and father, brought by his friend Wesley, joined us with his children as well.

One man talks about thoughts and imagination. He realizes that overreaction can be even slight. He wonders what he believes that put him in that state of shock, causing him to go into his head. Jesse urges people always to be aware.

Can you sin as a Christian? 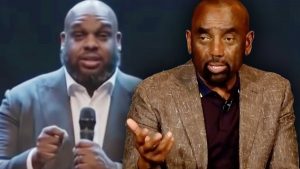 Jesse asks: Who believes that, as a Christian, you can sin?

Although Jesse hates talking about gossip or men who get accused, he brings up the following story only to hear people’s reaction. A pastor named John Gray, who worked for Joel Osteen (that weak preacher) in the past — he apologized in a long message for committing adultery. Reportedly, the young cheating woman (who some say may be pregnant by him) recorded his angry call, or shared his recorded voicemail. It was said he bought his wife a Lamborghini after he cheated (the first time), and she stated in response that Satan made him do it.

What do you think about preachers who cheat on their wives? Different people in the service respond. If you found out that your pastor was cheating on his wife, how would you feel about it? Should he apologize to the church? Should he leave?

Many people say that he should not step down, while some say he should. Jesse asks Cesar if John Gray should turn himself over to experts, counselors and psychologists?

Most Christians believe that you still sin after you’re born again of God. If that’s the case, why would they be angry at this man, the preacher? Based on how they believe, he should go sin, tell his wife, and come back Sunday — and keep preaching. Are they expecting the preacher to be perfect, but no one else can? It’s so judgmental! Either you believe that you can be perfect, or you don’t. If you believe you cannot, you should expect this of preachers.

If you believe the preacher to be sinless, then why do you think that you cannot be? People have a higher standard for the preacher than they do for themselves. All who judge John Gray are sinners!

Did he sin when he cheated on his wife? He broke the commandment, but he did not sin. The sin is judgment of yourself and others, playing god. This man is not born again — he felt like he betrayed his grandmother, mother, and his wife. He has not overcome the woman!

Caller Nick from Iowa believes that we judge every day and should judge. Jesse corrects the misunderstanding.

A lady follows up: What is it when you break a commandment, if not sin?

Conversation with a mother

Jesse tells this lady that a mother or father should apologize to their children for where they went wrong as parents. Looking back, she can think of ways she caused pain or was a bad example. Go and forgive. Don’t just write a letter or make a phone call.

Jesse presses her for any disagreements, such as when he says: Women don’t have love. She felt she had immense love for her mother. That’s the problem! Children are traumatized by their mothers — of the flesh, a fake love, which comes from hate.

She says that she can feel the enemy coming in when she goes to do the Silent Prayer.

Jesse asks about blacks and liberal whites making white people say that they’re privileged. They’ll even bother you when you’re eating dinner! How would that benefit blacks if every white person said that? What do they want from white people? Are whites expected to play dumb and stop building?

A 21-year-old black man, first-timer, disagrees a little bit with Jesse. He smokes pot! He says that we live in a white man’s world. Jesse urges him not to say that, and also invites him onto his radio show.

Jesse finally gets to his Biblical Question: What is the Kingdom of Heaven like to you?

Yusef from Atlanta, GA, answers. He says that you’re present, and everything happens right on time. You don’t have to work for it.

The man who, several weeks back, was considering suicide, is back with us! He talks a little bit about his life now.

Other people respond to the Biblical Question.

The young man from “Kosovo” (not Kenosha, but Minneapolis) asks about people who have a problem with the way he talks. Jesse jokes with him about poetry.

Thanks, all! Happy Labor Day! The show is live tomorrow, but the office is closed, so no counseling.