At Church, we discussed the Jussie Smollett hoax, white people hating Jews, whether God created sex, overcoming anger and weakness, staying with the Silent Prayer, and how people hold onto and repeat words in a cult-like way.

Jesse opened up inviting people to share their views on the story of Jussie Smollett, a black homosexual actor who falsely accused white men of attacking him. Police have accused him of staging the incident. One man said it exposed his “racism” toward white people, but only President Trump called him out on that. One young woman said his motive was to spread his anger.

A white male in Church piped up saying that it’s an evil spirit that Trump also has. He mentioned New York and Mammon, the god of money or something. He said Trump is evil because he works with Jewish people. He wouldn’t come off it, and Jesse warned him he’d have to leave if he keeps speaking out-of-turn. Eventually, after he kept blurting things out and pushing his agenda, Jesse kicked him out of the meeting. 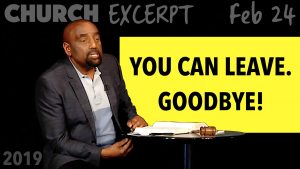 Whites are making a mistake going with anger. They’re going down the same road as blacks and others in blaming others.

Jesse asked a man how his mother reacted after the meeting last week. She talked about sex stuff, and got emotional. She said she’s going to do some hard praying.

Anger is evil — it’s a spirit driving people. Many whites have worn “blackface” over the years, but it wasn’t a big deal. But now blacks are hating whites and trying to control them. Unfortunately whites won’t speak up about this evil, and so a race war is coming. Men too are under attack. Every man in the eyes of beta females and beta males is a molester or rapist.

Questions from the people

A man asked about another talk show host Phil Advise, whom Jesse interviewed in the past. Phil is a Christian, but couldn’t answer whether he was the head of his wife. Men who hate their mothers hate all women, and are afraid of them.

Another man asked about the Silent Prayer. He can’t bring himself to do it consistently. He brought his girlfriend whom he referred to as “my new mother.” He’s living with her, and he’s like a boy sometimes with her. She does not see the truth, but the young man does. He will suffer as long as he continues to do things wrong.

A woman has a 6-year-old “beta male” son who’s weak, and who has three older sisters who are bad to him. His father was deported to another country. She asks what to do about it. Jesse urges her to forgive her mother and father, not hate his father, and have love operate through her. Then her son will change. And protect the son from the cruelty of the older sisters — she later says one of them is a feminist who doesn’t like Jesse.

A man named Esteban joined us in Church from Tijuana. He said he has a lot of hate — he hates his mother, his father, and God. And he’s single, which causes him to hate all the more. All people who hate their father hate God. But it’s enough to know that you’re wrong to hate.

This man says that his father used to bully him as a child, calling him mean names that mean “homosexual.” Then his father left the family to be with another “lover.” So this young man feels insecure about his manhood due to that. He also has difficulty praying. Satan does not want him to be still. But Jesse urged him to do the Silent Prayer.

You should wake up early to pray, and pray morning and night every day. Many people do not do that! Suffer and die! One man asks who he’s talking to when he “prays” with the words, “Lord, give me strength.” But that does not work. Do not ask for strength or money. Rather, pray to let God’s will be done.

Jesse answered questions about white people and people of color. Some “zoomers” showed up — young men ages 18 and 20 from Generation Z. Jesse told them they’re going to save the world. They’d found Jesse on Instagram after he talked about slutmakers with Amber Rose on The Fallen State.

Jesse has spoken to young men in prison, and they cry that no one told them that they simply needed to forgive their mothers. They get it right away when Jesse tells the message of forgiveness.

Last week, a man’s mother suggested Jesse was a “cult leader.” The whole world is a cult. Pro-abortion people say the same thing — that “it’s a woman’s choice.” That’s a cult. Others who believe that “racism” exists — they’re following a cult. Many Christians quote the Bible but have no truth. They’re part of a cult, and not truly of God.

Be careful not to hold onto words. Satan makes you think you know the truth — some people repeat Jesse, thinking they have the truth! Do you recognize the difference from when God reveals to you versus when Satan repeats words that sound like truth?

Just be, and the right time to say or do the right thing will come. Stop looking for leaders. Trump is not our leader. He’s our president, and he works for us, but only God is our leader.

Once you know yourself, you have no doubt that Jesus is with you. 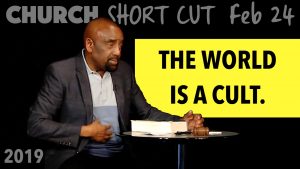 Watch 8-minute Short Cut: The Whole World Is a Cult.