Church with Jesse Lee Peterson, Sunday, July 12, 2020: Several first-time visitors talk about anger, forgiving their mothers, and dealing with relationships. Any man who has anger is a woman! Never tell a woman your weakness! Biblical Question: Do you long for pleasure or adversity? Jesse recounts the great Adam and Eve story. A man should never try to please a woman. New Biblical Question: Do you put your neighbor first in all things?

Raymond speaks on the takedown of the statues…

Kyle, a first-time visitor, said Jesse’s telling the truth was refreshing. He forgave his mother before hearing Jesse. His wife thought Jesse was a comedian at first. She fell in love with the truth coming from Jesse. She doesn’t know what to forgive her parents for. They were perfect? Yes. No, her mother was very angry, still is. She doesn’t want to hurt her. But she’s already hurt.

A friend of Kyle is new to this. Any man who has anger is a woman! He’s lived with his parents the past couple of years, to this day at 27. He smokes pot to feel good. He stresses, and thinks it’s normal. He doesn’t want to talk with his father or mother. Why didn’t his friend Kyle tell him that he needs to forgive his mother? You should at least tell your friends, but don’t force it on them.

24:00 Another first-time visitor came with his family. He’s frustrated. His cousin comes here. He went to forgive his mother. He lives with his grandmother. He wants his girlfriend to know his feelings, so she can help him release anger. Never, ever tell a woman your weakness or problems! He has had sex with her, unmarried. He says he’s not a man of God. Jesse explains that he has his mother’s identity, and he must deal with it and be born again. The love of women doesn’t stay love; it turns into hate. Forgive. No more sex. Disagree? Jail…

49:00 Nick from Iowa is 27, getting ready to move out of his mother’s house. He has epilepsy. He wants to forgive his parents and lose their identity.

What’s your plan in life? A couple of people respond.

54:00 Yet another first-time visitor joins for the first time with his son. He’s not the head of his wife, but he gives confusing, seemingly contradictory answers….

Marcos is a first-timer. He saw JLP from The Fallen State DC Young Fly interview.

58:00 Biblical Question: Do you long for pleasure or adversity? A Christian man responds. He is not living a perfect life. What’s the difference between being a child of God and a son of God?

12:05 Another first-timer responds to the man who spoke prior: Can you be a child of God and not have a perfect life? He’s 26, and asks about the Bible, whether it says that anger comes from the mother. Jesse tells the Adam and Eve story. He’s living with his mother, paying off loans. 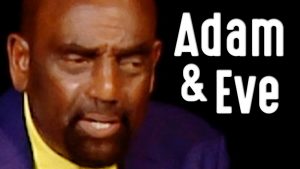 CLIP: The True Adam and Eve Story, As It Happened (8 mins)

More people give feedback on the Biblical Question.

12:30 Jesse answers his Biblical Question. Some people are taking adversity very hard. When going through it, don’t listen to anything Satan is telling you about it. In adversity is when you are made strong. Don’t look for it or try to create it. Allow yourself to go through it. It helps you keep your mind on God. Many white men are committing suicide. 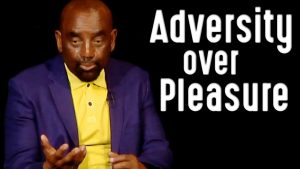 Clip: Long for Adversity, Not for Pleasure. (16 mins)

Never try to please a woman

12:44 A man should never ever try to please a woman. Jesse has been speaking with a woman (first-timer) and her fiancé Connor (who’s been here a few times). At this point he says this. Some disagree, and some agree.

A second caller Amy from North Carolina had her sons out of the home for 8 months, but two, 23 and 28, came back. They think she’s ok but that their fathers were deadbeat dads.

12:55 God is trying to start a new generation. Imperfect parents create imperfect children. Having sex out of wedlock is a curse. Taking care of your parents because you feel guilty is a curse. We have to do right.

New Biblical Question: Do you put your neighbor first in all things?