Don’t believe hearsay about Michael Jackson, R. Kelly, or gossip about anyone. Wait and see. The government is all lies. Men with fear must forgive fathers and mothers. 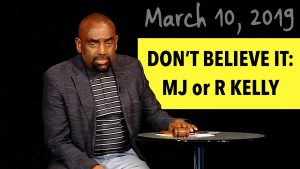 At Church, Jesse allowed people to share their thoughts on Jussie Smollett who was indicted on 16 felony counts in orchestrating an alleged hate crime hoax.

We also talked about Michael Jackson and R. Kelly, two men who’ve been accused of sexual offenses with minors. Jackson is long dead, and unable to defend himself. And what about the parents of these children who as adults now claim to be victims? Some believe they’re guilty, while others do not believe it.

Jesse advises the people: Never, ever believe hearsay. Never gossip. People will lie. You need both parties there. We are innocent until proven guilty.

A man asked if Jesse believes “hearsay” about Jesus, such as what was written about him in the Bible. He thinks it’s a contradiction that Jesse would believe Jesus’s words, but Jesse knows for himself. This man thinks, “People don’t make things up.” But yes they do just make things up! This man also said that if rumors are floating around, “nine out of ten times,” they’re true! But that is not the case!

Satan will whisper into a wife’s ear false ideas about her husband if he comes home late from work. Bring every thought into captivity. Every thought is a lie. The world has taken over, pretending to care about victims, but they don’t! We need to get back to right values and fairness.

THE GOVERNMENT IS ALL LIES

Jesse asks several people: What’s your impression of the government? The government is all lies. They could care less about us. A Muslim woman was elected to office, Ilhan Omar. She hates America, and Israel, and got into trouble. But in response, the Congress got together and passed a resolution against white people and Christians — they included everyone except whites and Christians in their protection! Meanwhile Congressman Steve King was attacked and punished for saying we need to put the country first.

We don’t need experts or to hold a meeting over whether we need a wall. Common sense says we need a wall! But people are brainwashed and parrot what they hear on TV, believing that a wall is not necessary, or a wall doesn’t work, or a wall is “racist.”

Jesse then talked with a “Mexican” man who said he has fear and doubt at times. When did Christians stop speaking up? In times past, we had men like Jerry Falwell who spoke up for Christian values. The way to get over fear is to forgive.

This man says he thought he forgave his parents who had a bad marriage and now live in Georgia. He’s 30 now, and says his father is not supportive of him. Another young woman Chris said she had a rough week with a job she hates, and doesn’t have an ideal relationship with her parents either.

Joel tells them that they seem to want something from their parents — something the parents don’t have. At one point he became like the parent to his mother.

Every soul years for the father. They’re looking for the love of a father. So forgive fathers and mothers — especially fathers. Through him you can return to God and be made whole again.

So Jesse urges the first young man to go to Georgia to apologize to his father for judging him. He protests that it’s a thousand-dollar trip! But he spends that much money on pot over time!

One man says that “fear is the Devil’s cocaine” — that fear prevents us from doing right. Forgive your mother. Every man with fear is a woman!

And you don’t necessarily want to bring your children to your grandparents — they messed you up, so what makes you think they’ll do better with your children!

God allowed Jesse to see that he resented his parents and that was holding him back in life.

Don’t go accusing your father, go and forgive. Satan is the accuser. One woman betrayed her dad. Jesse talks about what it means to honor your parents.

We touched on the Biblical Question from last week: What are the steps to believing in Jesus? First is to see that you’re wrong. We all are born into the fallen state.

One man asks Jesse when he thinks Donald Trump came out of the fallen state and became a Christian. Jesse doesn’t think of people in those terms — even Jesus, it’s about the spirit. But he sees Trump believes in God by his actions. He does not judge people. He has no fear. He does not back down to anyone of any color or gender. We have great force within us from God, and with it we overcome the world.

Christ is the Way, the Truth, and the Life. When we’re born again of God, he becomes our Brother, and God our Father.

The Bible tells the story of a man who waited at the gate and was healed. So we should wait and see what happens — be aware in the present moment and not distracted, and in those times, you can be healed as you look for the Father.

People believe lies and give up by believing their thoughts. Don’t do that. Don’t give up, and don’t believe into the thoughts. Go and forgive. Stay with prayer. Speak up, but don’t resent. And live right — do not be having sex out-of-wedlock. Don’t take on the excuses Satan feeds ou. And lastly, be you. Don’t follow any leader; let Christ be your leader.