Church on Sunday, September 8, 2019, streamed live video 11 AM PT on YouTube, Facebook, Periscope, DLive, and Twitch — but not Mixer today. (Microsoft-owned Mixer is making us jump through some new hoops; we should be back next week!) NOTE: The latter three platforms do not preserve past videos long, but are great platforms for watching live.

We started off with a nice Spanish guitar song written and played by Erik from Scotland. 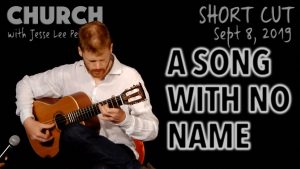 WATCH: A Song with No Name (by Erik from Scotland)

Millennials: Talented, But the Other Half Is Missing

Jesse starts off making a few points. He’s said for some time that millennials (young people in their mid-20s to late-30s) are very talented, but the other half is missing! Well, now he’s identified that other half — they’re selfish! And they don’t know there’s anything wrong with it!

So Jesse offers tips for millennials to follow in the workplace. While at work, don’t sneak and go on your cell phone, and then hide it when the boss comes! You’re stealing time that you agreed to dedicate to your job! But the millennials have no guilt or shame about it! They’ll get mad at you for pointing it out!

WATCH: How Millennials Can Live More Than Just a Half-Life

Some millennials in church speak up, some admitting fault in cheating time. One man talked about logging Saturday hours and being in a dispute with his boss over it. Later in service, a man says it’s being promoted in the corporate world to let employees be on their phones!

Millennials also take things personally when they get questions about work from the boss! Jesse mentions speaking at a JSA event a couple years ago, in which high schoolers freaked out over what he was saying. They hid in the bathrooms and cried! The younger generations can’t handle real life! The adults shut down Jesse’s speech!

For millennials and white people, material things are too important. They’re not willing to stand up for what’s right despite threats of losing a job or losing something. Jesse tells about the rich young ruler who wanted to inherit the Kingdom of Heaven like Jesus, but didn’t want to let go of his stuff.

A young woman talks about millennials being under pressure due to comparing themselves to others, a bigger temptation due to social media. (Jesse often tells people never to compare themselves to anyone else.) But pressure should not get inside of you. Jesse has to move at the end of the year, so he’s under pressure, but it does not stress him out.

People can’t handle words anymore! Later we talk about how millennial men don’t know how to take care of themselves!

The Pot-smoker Finally Did What’s Right!

A lady who’s been attending for some time, who’d admitted to smoking pot and hating her live-in boyfriend, spoke up today. One recent week Jesse said that she loves her child’s father more than God, so she won’t do what’s right and move out.

She now realizes that she suffered because she was doing wrong, allowing her boyfriend not to do the right thing and marry her. When she told him this, he became angry and took their child and left. But she says she handled it right, so her son came back to live with her and continue at school, and her boyfriend admitted being angry.

Questions on Relationships and Religion

Jesse’s church producer James asks a few questions asked online via the YouTube Live Chat. One man asks about dating people from the workplace. Another asks about expensive traditional marriages. A third man says his girlfriend would want to send her future child to a daycare instead of her raising the child at home.

Jesse talks with one Christian man about forgiving his mother who died, by getting to know himself.

What happened to the old generations, asks one man, that the millennials were wiped out? They were into pot, and the so-called women’s movement, and the government becoming the daddy of the black home destroyed these generations. But with men waking up, such men have no fear, so they can restore the proper order over the women.

One struggling man asks Jesse if he ever lost faith. He’s an intellectual and is not praying consistently, unceasingly.

What Would You Say to Someone with Cancer?

Watch: What to Tell Someone Dying of Cancer

Jesse recounted a question from someone on his radio show this past week: What would you say to someone who’s dying of cancer? Some people give their answer, talking about anger and forgiveness. Jesse answered on the radio call what he’d say to a cancer patient: “Better you than me!” People put emotions into it and feel sorry of the person, but that does nothing for them! It’s better to be upbeat.

Jesse jokes with his uncle who has cancer, and asks him if he’s depressed and how he’s handling it. His uncle thanks him because the other family members don’t treat him normally anymore.

Someone reminded Jesse that he had yet to answer his Biblical Question from this week! Ecclesiastes 12: 12 says that “much study wearies the body.” What does this mean? Jesse answers it after reading the fuller passage. We should keep it simple, as God is simple. The people who are into studying are not living it. Rather, keep it simple. Fear God and keep his commandments.