The world is misleading people. They fall into thoughts and anger. The Bible is a roadmap back to the Kingdom of Heaven within. But only believe in God. Beta males should forgive their mothers.

Many people came to Church with questions today. One man asked: Does Jesus test you?

We touched on this past week’s Biblical Question: If we lose freedom here in America, is there anywhere else to go?

THE WORLD HAS MISLED YOU

There are reportedly no indictments at the conclusion of the  two-year-long so-called “Russian collusion” investigation of the Trump campaign. People have been lying and making up false accusations the whole time, but it came to nothing. It’s like the battle going on inside of us, between good and evil, truth and lies. (See 6-minute short cut: “No Collusion: The Media Knowingly Lied About the President)

The world is leading people in the wrong way! A man James interviewed on The Hake Report today said he wished he was a woman!

Some people believe the earth is flat! A couple of people at church believe this. One man says he believes it because we’re lied to in so many ways, so they must be lying about the earth being round. A mother believes the earth is flat, although she can’t prove it — her daughter who also comes does not agree with her. (See 3-minute Short Cut: Do You Believe the Earth Is Flat?)

A man asked about the fake news about Jussie Smollett and Russian Collusion, and asked Jesse’s thoughts on the New Zealand attack. Jesse pointed out Christians should speak out about the media’s bias against them (watch 3-minute Short Cut video). This man also talked about Jesse’s discussion with a woman on his radio show about cursing, sin and perfection. Being perfect means having no anger, but perfect love. That rang true to him. The truth is in all of us — God lets us know what we need to know.

Another man believes liberalism is like a religion. He asks if Jesse sees it as something orchestrated by a group of people at the top. There are of course people pushing evil at the top, but the followers are following because they’re in a fallen state (watch 2-minute short cut video). They believe “racism” exists. They are children of the lie.

One woman felt peace when she first joined Church, but now she feels stuck, not free (watch 5-minute Short Cut). Is she over her anger? She drifted back into thoughts and into doubt. Be patient. Pray morning and night. Don’t give up on yourself.

THE BIBLE IS A ROADMAP 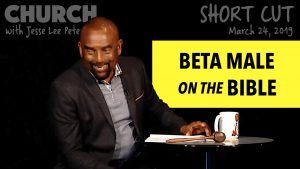 Earlier in church, a young woman asked where to start in reading the Bible. Another person asked what the Bible is, if not the “Word of God.” The Bible is a roadmap back to yourself, back to the Kingdom of Heaven within you. One lady who called in to the show believed in the Bible. But God says only to believe in God — to trust no man. Some disagree with Jesse. Should the Bible say to “study to show yourself approved”? People say the Bible is unchanged in 2000 years or so. How did the Bible change your life?

Later in Church, Jesse reiterated that God said to look within. People who are into the Bible don’t live it. A young man talks about putting the Bible inside of you — an atheist may read the Bible, but not to find the truth.

BETA MALES SHOULD FORGIVE THEIR MOTHERS

As a man discussed these things with Jesse, the topic came to his mother. He said he couldn’t think of anything his mother did wrong. He’s married now, and admits he is not the head of his wife — that his wife gave a laugh when she considered whether he’s her head. She thinks they’re partners. He admits he’s a beta, and Jesse tells him to forgive his mother.

Toward the end of the service, more couples talk about relationships, marriage, alpha males, beta males, and and the need to forgive their mothers. 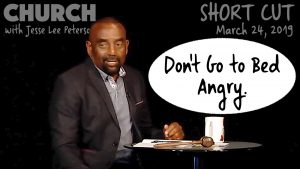 A woman asks if she’s a child of the lie for falling to anger toward her husband. She thanks Jesse for the Women’s Forum which took place last Thursday. (Women’s Forums are held the third Thursday of the month, 7pm at BOND in Los Angeles, unless Jesse’s out-of-town.) She talks about reading a Bible verse that talks about children of God humbling themselves and praying. Jesse urges the people: Don’t go to bed angry. A little problem will become a big problem when you wake up.

It’s not about liberal or conservative, but right versus wrong.

We talked about the new Biblical Question of the Week: What is a white supremacist?