(Note: The audio kicks on about 1:00 into the service. Please bear with audio issues early on in the video.)

Jesse talked with young women who resent their mothers and are in troubled relationships; Biblical Questions: What is a “white supremacist”? And: Do you discriminate? Don’t want anything so badly you’ll do anything for it.

We talked about black homosexual actor Jussie Smollett going free when he should have been prosecuted for lying about a fake “hate crime.” Jesse was surprised at first, but then when you consider it, it’s not surprising.

Jesse asked people about this past week’s Biblical Question: What is a white supremacist? Most people have never seen a “white supremacist.” Yet the media talk about them all the time.

Then we discussed the new Biblical Question of the week: Do you discriminate? One man says he treats people differently based on the way they act. 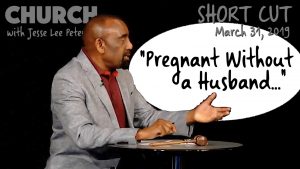 Watch 13-min Short Cut: Woman Cries Discussing Mother Who Kicked Her Out at 17

One young lady joined us with her boyfriend who’s been coming. Is he an alpha or beta male? She of course pauses, but says he’s much better after listening to Jesse and another man. He used to follow his mother and sister. Does the girlfriend control him?

The young woman is pregnant, but not married. However, she and her boyfriend want to start to do things right. Jesse always tells people: Don’t have sex out-of-wedlock, and don’t live together.

Her mother kicked her and her brother out when she was 17, because they confronted the mother about something. But the mother did not take it well. In fact, the mother kicked her father out as well. She is fairly close with her father. But Jesse urges her to face her mother, whom she still resents. This young lady teared up, crying, because no one had asked her about these issues before now. 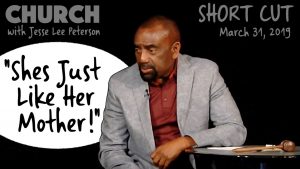 Jesse offers a theme and warning: Don’t ever want anything or anyone so bad that you can’t let it go. He invites people to share their stories of making this mistake. One man said he was with a “chick” (young woman) for two years until she cheated on him. He wanted to get back together with her, and she stood him up five times before he finally came to his senses.

Another young woman broke down crying while talking about this. She joined us with her “friend” or “boyfriend” — she’s not sure which, because their relationship is rocky right now. She hated herself because she feels she caused her boyfriend so much pain. But if he was a real man, she could not have caused him pain. Nothing is so important that you should hate yourself. She felt she was stopping him from moving forward in his own business.

The young couple is from Canada. They were living together, and currently traveling together. Jesse reiterates: You have to start doing it right, and not live together or have sex before marriage.

Later, Jesse reiterates: Don’t want money, friendship, a husband, a woman, so much that you’ll do anything to get or keep it. He gives a few of his own stories — one in which he invested some of his own money in a business to make money for putting into BOND. But he didn’t research, but was just excited because of how convincing the man was. He lost that money, and it was a lesson.

In the midst of these stories, a Muslim spoke up in Church, who said he’d called-in to Jesse’s radio show. He had a child at 14, and stayed with the woman, and had more children with her decades later. His parents were Christian, but he became Muslim. He starts to debate with others, but we don’t want a debate in Church. He does not love all white people because of stories from his past. But you cannot be a son of God and hate your fellow man. He thinks Jesse hates Muslims, but that’s not true. 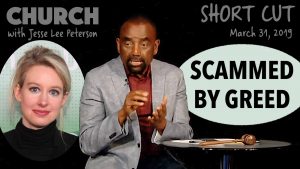 Jesse also talked about an “inventor” woman named Elizabeth Holmes who lied to gain fame and money. People were excited partly because she was a woman — like a female “Steve Jobs.” They invested millions of dollars in her company, but it turned out not to be what she claimed.

Similarly, with this false “Russian collusion” story about President Trump, they wanted it to be true, so they pushed a lie. Satan is a great deceiver, and his children are deceivers, so if you are not careful you can find yourself believing their lies.

If you feel you’ve got to have it, let it go.

DOES GOD LET YOU FAIL?

Satan gets involved in your thoughts in everything! Be the watchman at the gate, waiting for Christ. Let go. We’re all idiots.

We talk about what love is. A woman says that the children of the lie don’t allow people to fail — they take people’s pain and common sense away. Does God let you fail? Some say yes. But Jesse says that God does not let you fail.

We also read from 1 Corinthians 2: 9 (NKJV), “Eye has not seen, nor ear heard, Nor have entered into the heart of man The things which God has prepared for those who love Him.”