Congrats on weddings! Last Biblical Question: What is the American Dream? (A grown man cries!) Speak up as Christians for First and Second Amendment! We read from 1 Corinthians 2 by Paul. The wisdom of the world is crazy. Should you respect your elders, or be honest? A woman is seeing that she’s no good. Not likely to start seeing you’re wonderful! Next #BiblicalQuestion: Was Christ created? A mother has a lot to think about now that her son has forgiven her.

Jesse recognized a couple of newlywed couples: Jesse’s bodyguard Mark and his wife recently married, and Cesar also just married his wife. Both men asked Jesse to officiate their weddings. Joel has been dating his “Boo Boo” (Grace) for a year now — Jesse joked with him about that.

As a side note, Jesse pointed out a video online that someone sent him. A “Bible thumper” guy who came to church talking crazy last week posted a video from last week’s church. This young intellectual man titled it something along the lines of bragging that the man “destroyed” Jesse. That’s evil. You don’t come to church to destroy the pastor. You come to talk and reason with people. But that’s the world today — evil.

What Is the American Dream? 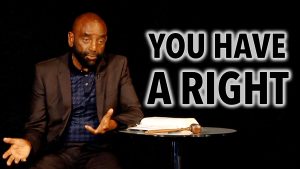 Jesse asked several people his Biblical Question from the past week: What is the American Dream? One man of Irish descent choked up about it. He said that at one point as a child, he and his family were Cuban refugees. He said he saw America as a place where laws matter, integrity matters, where you have a right to your property. It’s a sensible place. He still sees it that way. Other people spoke about what the American Dream means to them as well.

Then Jesse talked about growing up on the plantation and their family getting their first black-and-white TV (before color TV!). He talked about seeing the white people celebrating the Fourth of July, celebrating the country. The black community where he lived celebrated Independence Day as well.

But Jesse never imagined that in America people would fight to get rid of our freedom of speech, our right to bear arms (the Second Amendment). He never imagined that we’d be bringing our enemies into our country and giving up the right to defend ourselves. Christians should get involved in politics.

Jesse’s looking for a new building for BOND, and he spoke in his usual frank and fun way about Mexicans and blacks in the “hood.” But the salesman got offended and said, with no sense of humor, “I don’t judge.” But this is how Americans should talk — openly and honestly with no hate. Speak up and live. It’s the American way.

Once you’re born again, you have no fear holding you back, nor the lust of the eyes. You have a brand new nature.

Jesse invited Gretchen on-stage to read 1 Corinthians 2, verses 1 through 10 or so. In this passage, Paul talks about not coming in a fancy or showy way. He also writes that no eye has seen nor ear has heard what the Lord has prepared. During the Men’s Forum, someone had said something strange about the Apostle Paul. So Jesse decided to read this, to see for himself. Jesse realized that the wisdom of the world is crazy. Those of the world tell no truth about anything.

The world label people “Nazis,” but don’t talk about evil antifa. Jesse will talk with the “Neo-Nazis” or the Nazi’s mama, or to Antifa or their mama. Because everyone is a human being who needs truth.

Seeing that You’re No Good

A woman who’s attended for some time now spoke up and broke down, saying that she keeps seeing wrong things about herself. Jesse asks her: What’s the problem? Don’t expect to start seeing yourself as wonderful now that you’re waking up. Once you wake up and forgive, you continue to see ways you’re wrong. But you should not judge yourself or give up praying and seeking first the Kingdom of God. (Interestingly, this discussion is much like one from Sunday Service January 18, 2009, which premiered on BOND: Rebuilding the Man channel Saturday!)

A Forgiven Mother Joins Us

A young man who recently became a regular attender brought his mother to Church. This past week he forgave her and talked with her. She was very surprised, and he gave her a lot to think about. She grew up Catholic, and now attends a Christian church, but always thought her son was an atheist. And she never considered forgiving her son’s father, because of the terrible conflict they had. Jesse urged her to think about those things and see for herself.

Veteran’s Day is Monday, and the BOND office is closed, although we will have the radio show as normal. Women’s Forum will be on the third Thursday of the month, not this coming Thursday, but the next one, next week.