Church with Jesse Lee Peterson, January 3, 2021: Happy New Year! This year, let’s focus on love and bring back Christianity. It’s an honor to be a Christian, but many don’t know it. People are so easily trained and misled. Many believe that Jesus is God. Before you enter the Kingdom of Heaven, you must forgive (especially your mothers and fathers), and then God cleans you from within. Did you choose to be in hell? Many first-timers today! Whites and men are losing their country and family because of fear and weakness. Endure the pain of fear of loss.

New Biblical Question: God said salvation is of the heart; what does that mean?

Before Church intro, Jesse is heard asking: If you die, does everyone else die?

A 17-year-old young lady answers a question from Jesse and gives her impression of her father — they drove up to L.A. for Church from Arizona. 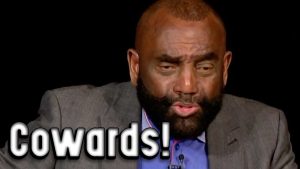 Jesse comments that whites and men are cowards. You cannot live that way; you’re losing your country, your family, and everything because you’re a coward. People stay high in order to live with themselves being cowards. It’s not about color, but about character.

This year, we’re going to focus on love, and bring Christianity back. It’s an honor to be a Christian — a blessing given by God. People call themselves “spiritual,” like Oprah. We need Christians in America. We must turn it around this year.

You should love God with all your heart, soul, and might, along with nothing else… more than yourself, parents, money, wife, children, or anything — otherwise you’ll be a coward. In love, there is no fear. You cannot be controlled by anything. And love your neighbor as yourself. Christians turn on each other as quickly as a “sinner” would; they have no love for one another.

We’ll talk about how to get back to loving God with all your heart, soul and might.

‘What Is a Christian?’

A man asks: What is a Christian? He was raised by Christians, but his father turned Muslim because of cultural Marxism, he believes. He found a Japanese sensei who displayed Christlikeness, and later he found Jesse.

Some people don’t like to identify as Christian, because they disagree with other Christians.

Jesse asks: Does the Bible say to pray in Jesus’ name?

People are so easily trained.

Have you thought about the fact that Jesus said that in order to enter the Kingdom of Heaven you must forgive? You don’t have to clean yourself up first. You must forgive.

We’ve been so brainwashed about God, life, and Christianity. People are suffering unnecessarily.

Some Christians now believe that Jesus is God.

One guy insists that he’s not Christian, but worships the same God, whom he calls the “All.” But he’s not sure he has faith in God.

Never try to prove things to anyone; they have to find it for themselves.

So many people are crazy now! Jesse only knew one crazy lady who lived under a bridge in a neighboring county on the way to his girlfriend’s house. He was afraid she’d scare his horse when he rode over to see his girlfriend.

The Kingdom of Heaven is within — it’s inside of you. It’s not in some book or out there. Until you start looking within, it’s a waste of time, and you’ll never find it.

After you forgive, you’re born again of the spirit, and you start to live. Before that, you’re born of your mother, and you’re dying.

Another man asks: How do you forgive someone who’s already died? Get to know yourself. Do the Silent Prayer. silentprayer.video also findable on rebuildingtheman.com/church He’s Catholic.

Did you choose to be in hell?

One man says he thinks being a Christian is being a servant of God. He says he is in hell now, and he made the choice to go to hell. He grew up Christian; his father and mother were saved at the same church, he says. You did not choose hell; you were born in hell.

Did you know that any man with anger is a woman?

A young man Jake visits for the holidays from Wisconsin. He’s waiting until the last day to forgive his parents, since he has to hang around them. (Jesse explains that mothers put the idea in kids that their children want their fathers at sports games.)

A young woman had fear as a child, but realized it was her mother. She used to bite her nails. She now understands that her father has love for her and her sisters. The women in her family have a lot of anger. Jesse says: Women don’t have love; they receive love. The love that mama has will kill you. She’d come to a Women’s Forum before — now brought her father and sister.

Her 17-year-old sister won’t forgive until she feels comfortable; but you won’t be comfortable until after you do it.

Jesse urges you to love God with all your heart along with nobody else. And love your neighbor as yourself. Do the Silent Prayer. Endure; when someone seeks to hurt you in some way, or you experience fear of losing something, endure that. It’s God who gives you the strength to overcome the ego. God cares about the heart. Once he renews the heart from hate to love, and perfect love endures all things.

White people love their stuff and reputation more than they love God. Men too. They’ll be called racists, or misogynists, and lose their job and have their name tarnished. You must love what’s right, and endure the stomach pain.

Another first-timer lady Lorena (sp) asks about dealing with her husband who overreacted to losing something. She overreacted when Jesse said that women have hell in them, but realized he was right. She said it was easier to forgive her mother than her father.

So this year we’re bringing Christianity back. Endure. The love of God is the power to defeat evil. He’ll take away your wrong relationship with people and things. You got into that because you fell away from God and Satan became your daddy. Next week, let’s hear some endurance stories. Last word: A military guy says: “Suffer in silence.”

Nick reads the new Biblical Question: God said salvation is of the heart. What does that mean?

We have a matching grant still, so you can support via https://rebuildingtheman.com/donate

Men’s Forum this first Thursday of the month (and year!) 7 PM at BOND in L.A.! Happy New Year!