Church with Jesse Lee Peterson, Sunday, August 16, 2020: Lots of first-timers, including many young black Americans forgiving their parents — some not. Some ladies talk about their relationships with their husbands and children’s fathers. You get what you deserve in life when you live wrong and do wrong. Accept it, but don’t freak out! Biblical Question: Is there one thing in life that you take seriously? New Biblical Question: Many are called, but few are chosen. What does that mean?

First-time visitor Iko (sp) is new to Christianity. She forgave her mother, but doesn’t know what to do next. She does not want to spoil her enlightenment by reading the Bible. Her mother did it the cowardly way by “forgiving in her heart.” She’s always been close with her father, although she got brainwashed by her father. She and Jesse both cried by seeing Bob Marley’s granddaughter Selah’s video (musician Lauren Hill’s daughter).

Another first-timer Jase, 22, asks about coping with the fact that most people in the world are nuts or stupid. Deal with them by not hating. Realize that they can’t see, just as at one time you could not see. The experts in the media are lying with no shame. Don’t hate them for it; God is protecting you from them. He tells his mother that Jesse’s a comedian. Has he forgiven his mother? No, not yet. There’s no way around it. Before the end of the year he says he’ll do it. He lives in Arkansas but comes to California a lot.

Yet another black first-timer Ken from South Central L.A., 27, is getting distaste for hip hop and TV shows he used to like. He realizes that Tupac and Eminem were/are betas. This awakening is ruining things he used to love. Now he’s in the world but not of it. So he’s no longer addicted to them. He has not forgiven his mother. His brother was jumped in 2014 and 2015 by gangbangers, and now he’s lashing out. So he does not want to put it on her. Jesse advises that he takes the first opportunity. He lives with his mother! Stay with the Silent Prayer.

Young Woman Wants to Submit to Husband, BUT… 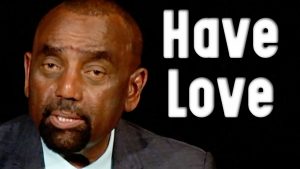 Marisol from Damascus, MD, says she does not submit to her husband who follows Jesse. She does not like him smoking pot and playing video games. She thought she loved him, but after 7 years, they have no kids. Did she have sex with him before marriage? She answers very quietly, “Yes.” Whenever you have sex before marriage, you marry the wrong person. You think you can be wrong and do wrong, yet you think life is going to work!

Her husband watched a video about Tomi Lahren, and so he told Marisol to stop the career thing. That motivated her to try to do right. Take your eyes off him and on yourself. She forgave her mother, and was always close with her mother. She noticed she does have an ego and admitted this to her husband.

A pot-farmer living with his girlfriend

A man has a child already and bought a home, living with a woman he wants to marry. No sex for a year! He’s an expert at growing marijuana. He’s quit everything else. He was raised as Hari Krishna — they’re a mess because they’re all liberals. He asks: Am I aiding to the demoralization of people? He got in a confrontation with a black man at his pot farm warehouse, and now he never wants to go back again. He feels that he’s done.

He does not want to kick his girlfriend out, because they have a 9-year-old son whom she homeschools. They’re renting. Stay away from sex.

You get what you deserve

Michael from Arizona wants to know if Christ deserved to be crucified. His wife seems to disagree.

A pesky thing on a man’s mind

A man asks about the BOND Home. He feels that it’s like a mama who won’t kick out a 19-year-old. He feels Jesse is enabling the guys not to grow.

A woman breaks down crying

A young woman feels that guys may take Jesse’s message in a way he does not mean. She does not feel it’s right for men to punish their wives or take revenge on them. She apologizes for crying, saying that she’s pregnant. Another young lady Grace responds. Jesse advises her that she’s getting what she deserved, and got into the situation that she should not have done. The man she married is getting what he deserves as well. But stay calm, don’t overreact, and God will guide her. She has not been praying; she has morning sickness — not baby blues!

Guys may take what Jesse says, and think they’re “sons of God,” and judge the women as crazy and evil. The worldly situations should not be so important to you. They will make you overreact.

Jesse advises everyone that he’s not an on-call doctor.

Mike in NC took Jesse’s advice and it’s working out. Thank you! Jesse advises people stay with the Silent Prayer.

Adriana had called-in this past week about her son and his father — she was tripping! She told her boyfriend that “Jesse said” this or that. Jesse urges people not do that. He’s not Jesus! She learned not to freak out or judge. Her son was tripping out, thinking he was going to live with his mother, and then thinking he was not going to do so.

Another lady who has regularly attended says there’s a difference between letting the man be her head and letting him have power over you. She says her husband is a strong person, but she was letting him take advantage of her, even as a godly man, in ways. She talks about emotional independence and taking responsibility for her own emotions. Jesse has Grace respond. Jesse urges ladies to do what he tells men to do. Go and forgive your mothers, and love your fathers. Sometimes women take the message in a way Jesse doesn’t mean, just as men do.

Don’t look for a man, or woman.

Another Mexican lady, a first-timer, talks about spiritual issues. She believes reading the Bible shows her the truth of what Jesse also tells. She has not yet forgiven her mother. Jesse also advises she ask her father why he was not around, and allow him to say.

Derek from Alabama was fired by a black female manager whom he felt was evil. Don’t worry about the job. Do the Silent Prayer. He has back problems and can’t do general labor now. (He’s black.) Go and forgive your mother — doing it in your mind and spirit is not enough. And you can read the Bible.

Some of the ladies give more feedback about relationships and marriage.

Jesse answers how to forgive a dead parent. A young man talks about his girlfriend who tripped out after her father died. She started acting crazy like her mother. He was engaged but got the ring back after she changed. 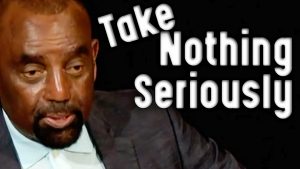 CLIP: Is There One Thing You Take Seriously? (12 mins)

Jesse finally gets to his Biblical Question: Is there one thing in life that you take seriously? Daron from Atlanta, GA, says he takes being a father seriously. Other men and women answer. There’s nothing on earth, no one, no place, no thing, that you should take seriously.

Jesse talks about Greenleaf, a show on Oprah Winfrey’s network about a black church. It’s so phony, but it’s what is going on in real life too! Actors on a stage. Real Christianity is not acted out. Very emotional. It’s all an act! Unless you’re born again, you don’t really know what it’s about.

In California, they’re trying to pass a law so that if you move out of California, you’ll have to pay taxes to California for ten years! They already made it difficult to live and do business in California.

Women’s Forum this Thursday! Third Thursday of the month, 7 PM at BOND in Los Angeles, for ladies only!

Stay with the prayer, speak up, but don’t resent. Listen to the Radio Show, The Hake Report, and don’t forget to donate! We’ll get to your Super Chats and DLive donation messages on radio tomorrow!