Church with Jesse Lee Peterson, Sunday, December 27, 2020: Do you have love? What is love? How do you develop love? Two sisters, their mother, and a boyfriend join us. Chris reads 1 Corinthians 13: 1-13, and the poem “If—” by Rudyard Kipling. Quietly endure all things, without reaching for pot, alcohol or anything. Christ suffered without complaint, and so should we.

Biblical Questions: LAST WEEK: What does it mean that none but the righteous shall see God? (To be answered at-length on the radio show Monday.) THIS WEEK’S Biblical Question: What causes the work of the flesh, and what is it?

Merry Christmas! Are there other pastors who tell the truth?

A young man finally went to his mother to forgive him. She aborted his older sibling. His cousin drugged him with DMT as a young teenager, and he tried to kill him.

Do you have love? What is love?

Quite early in the service, Jesse talks about love. 99.999% of people do not have love. How many of you have love? People describe what they think love is. How do you develop love?

(Jesse caught the end of Braveheart, and they tortured Mel Gibson’s character. He refused to bow to the king or drink a painkiller from a woman who kissed him. Before they cut off his head, he yelled out, “Freedom!”)

A young black lady Taylor joined with her sister and boyfriend. Victoria says she saw this weekend that she does have love. Her stepfather said he realized Satan tried to get to him through her mother. She describes getting mad at her brother but catching herself. Gracie does not, she says; Esteban does, he says.

Jesse wants to focus this year on the highest command: to love. Then you can know that you know whether you have love or not.

One man Jesse calls “Santa” (with a beard) says he loves even the homeless (for proving Covid is a “scam”). What is love? He says it’s the opposite of hate. Another says it’s telling the truth.

A lady was a mess with no love, but now she says she does have love.

Jesse makes a great point, saying that many Christians’ focus is not on love, but on the weakness of the flesh. People whom Jesse counsels with — they talk about what’s wrong with them, and on others not loving them back.

A Christian family man explains his understanding of love. A 16-year-old young lady (the man’s daughter who’s already in college!) describes her love for her three younger brothers. She does not really love or know her mother. Jesse asks the father about guiding his daughter.

A young man who brought his girlfriend and her sister talks about love. Toni (sp), mother of the sisters, says love is a feeling, not concrete — good, bad, confusing, and unconditional, coming from life’s experiences. Laughter erupts, especially from the mother, when Jesse asks the girlfriend if she obeys her boyfriend. When she first listened, she disagreed with some things that hurt her feelings, but saw Jesse was right. Don’t hold anyone’s past against them.

Yet more feedback on love

Victoria asks about identity. Other lively conversation ensues, including about women and men hitting each other.

Jesse calls on Chris, who is white, to join him on-stage and read a well-known Bible passage about love (1 Cor 13: 1-13). Chis then reads the poem “If—” by Rudyard Kipling, which Jesse says describes how to develop love.

What does all that mean to you?

A young woman said she hated Jesse’s show at first, as an angry person. She even thought that a man in her life was being brainwashed by Jesse! But she forgave her mother and now sees the truth of what he says. Jesse recalled a phone call with another young lady Grace from a few weeks ago on his radio show.

The family man talks once again about the biblical passage. Others talk as well. A man says that the “If—” poem reminds him of Job in the Bible.

A man asks about jealous mothers. His fiancée believes that they should continue to go on “dates” after they’re married and have children. The mother wants the focus to be on her, even turning children away from the father. One of the sisters who joined us questioned this; Jesse conceded that every 5 or 10 year anniversary, then you can go out.

James asks a couple of online questions. One person asked how to convince his girlfriend to forgive her father. 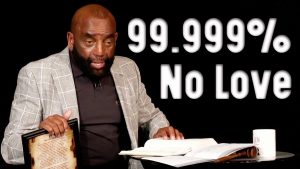 CLIP: Most Christians Have No Love; How to Get It (20 mins)

You must endure quietly. You must overcome all things, not having anything too important to you. He describes the beginning of BOND for a time when he lived in Oregon. He did not know that God was killing off his ego, but thank God he could not talk to anyone about it. You must go through it; feel the loss, and do not overreact. Suffer quietly; Jesus suffered; who are we that we should not suffer? Once it’s over, paradise is yours. Those things that cause you to overreact are the things that are your god.

The ones closest to you will turn on you; they have no love; but you love them anyway. We cannot hate our fellow men and women. If you have one iota of anger, Satan is your daddy. You cannot enter the kingdom of heaven if Satan is in you.

Don’t smoke pot or drink to get through it. While you’re going through it, you will see when to fight, and when not to fight — when to be quiet, and when to speak.

Jesse also responds to a number of questions about trials and doubting thoughts. Every thought is a lie!

Jesse repeats his Biblical Question from the past week: What does it mean that none but the righteous shall see God? Many people say you can still sin as a Christian. But he said to be holy as God is holy. Do not be in denial. We’ll talk about this on the radio show tomorrow.

Brand new Biblical Question: What causes the work of the flesh, and what is it?

The young “Santa” man says Satan has told him both to stay and to leave Los Angeles, that the rent is too high, etc. If Satan tells you to do something, don’t do it! Wait and see. Don’t run just because everyone else is doing it. Let it be that you see for yourself.

Jesse ends by telling people to suffer through stuff, not with alcohol, drugs, or other things. People will come after you. Deal with little things, so that when big things come, you’ll be prepared. Speak up, but don’t resent. Do the Silent Prayer. Be still and know God. Thank you for the Christmas gifts and support! We have a matching fund through January 30th.